If you look hard in this picture, you’ll see a little masked face gazing down. 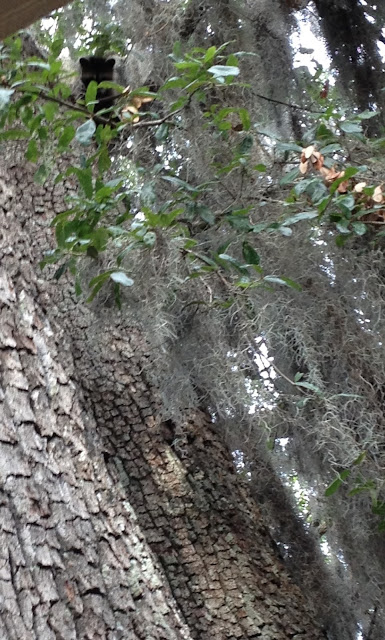 While we were waiting to eat dinner in a coastal restaurant, we noticed a group of people looking up. We joined them to see what was going on. This fellow and his brother were tussling with each other high in the tree, and then they’d occasionally stop and eyeball their audience. We oohed, ahhed, snapped pictures, and commented on how cute they were. It was nice of the restaurant to provide such a great floorshow while we waited.


Then I came home to my pitiful little container garden in the back yard and found tomatoes scattered on the ground like billiard balls. All with bites out of them.  It appeared that one of our little entertainer’s distant cousins had a hey day while we were gone.


The rabbits that have eaten all my squash and zucchini aren’t looking so charming either.


That’s after several weeks of fighting powdery mildew out there, too.


Made me think of a verse slightly paraphrased.


“Don’t’ hoard squash and tomatoes down here where it gets eaten by rabbits, hit by powdery mildew or―worse―stolen by raccoons.”


If my identity were wrapped up in farmer, I’d be in big trouble.


But the truth is that sometimes I let my identity get wrapped up in other ways, like writer.


If things don’t go well in that arena, with the literary version of raccoons, rabbits, and mildew, I can start to slide south and get down in the dumps. Because one thing never changes in any writer’s life, and that’s the fact you’re going to get rejections. Or worse, just never hear from projects sent out. And what about that new algorithm Facebook is using, how’s it going to affect my blog traffic when I post on Facebook?


Now, to the unparaphrased version of Matthew 6:19-21 in The Message:


“Don’t hoard treasure down here where it gets eaten by moths and corroded by rust or—worse—stolen by burglars. Stockpile treasure in heaven, where it’s safe from moth and rust and burglars. It’s obvious, isn’t it? The place where your treasure is, is the place you will most want to be, and end up being.”


It requires a certain vigilance to keep us from drifting into the arena where we let our worth be determined by our successes or the lack thereof. Raccoons, rabbits, and mildew are always standing by to assault us, and we need to keep our eyes on our true worth, that of being a child of God.


This child of God is about to turn in her gardening gloves and let the critters have it. Summer is about over anyway, and I can hope for next year.


Hello farmer’s market.
Posted by Beverly Varnado at 9:56 AM

Thanks, Lilyan. Oh, the frustrations of gardening!!!