Coming at you fast

Our poodle Charlie has a problem whenever we go to the beach. With Charlie being so small, and the wind currents usually strong, he looks as if he’s going to lift into the air like the “Flying Nun.”

Now’s there’s a dated reference for you.

As you can see, his little ears stand at right angles to his body the whole time we’re there. Somehow, it doesn’t seem to affect his enjoyment though. 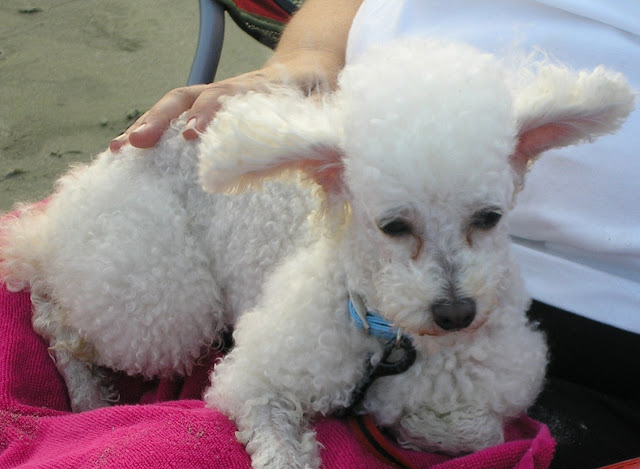 I've often known how he feels. I’ve been in the middle of some strong winds myself during which I could hardly catch my breath before another problem presented itself.

“If you work these words into your life, you are like a smart carpenter who built his house on solid rock. Rain poured down, the river flooded, a tornado hit—but nothing moved that house. It was fixed to the rock.” The Message, Matthew 6:25

I don’t want to lift off my foundation when rains, rivers, and tornados come which often appear as things like health issues, family problems, or financial struggles. Sometimes life comes so fast, I hardly have time to process.

The thing I know about Charlie is that when he’s at the beach, someone’s always holding him, and that makes him feel safe.

And if I allow God to plant His words of truth deep within me, I’ll be secure through any storm.

So, if you see me, and my ears are flapping in the wind, don’t worry.

God’s got me.
Posted by Beverly Varnado at 4:29 PM