I hope everyone had a wonderful Thanksgiving weekend.


Ours started out in, what can I say…an interesting way. You may grow weary of my animal stories, but I spend a lot of my life dealing with four legged creatures.

For various reasons, our family had to take two cars to my sister’s house, our destination for Thanksgiving Day. My daughter and I drove the “dog” car. My husband, Jerry, and my son drove the “food” car. We’re keeping an extra dog for family this month so that meant three dogs in my vehicle. We thought it best to keep the dogs and the food separate, because one Thanksgiving we lost a turkey and pie to a Bassett Hound before we even knew she’d gotten into the food. She was a sneaky canine.

For seating arrangements, we put Ellie the shiatsu and Charlie the poodle in the third seat and Lucy the lab puppy in the second seat--a configuration we hoped might keep everybody happy.

However, just as we were underway, Lucy lumbered back, drove the little dogs out of their beds, and crashed in Charlie’s accommodations. I had to stop, while my daughter reorganized everyone. We tried a different scenario.

There was Ellie in the passenger seat. 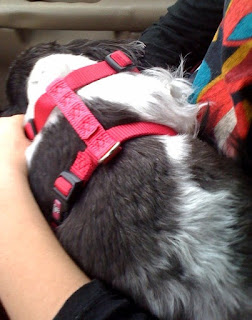 Lucy in a captain’s chair. 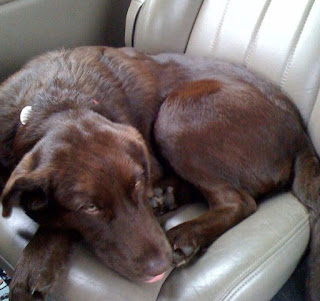 And Charlie in the third perch. 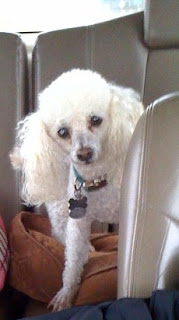 Just when I thought we had peace in the valley, Lucy arose and stuck her head into the front to nudge out Ellie. My daughter appeared to have grown a second head.

My daughter raised a pointed finger, “What are those?”

Ahead, a flock of guinea fowl strolled across the busy highway, stopping traffic in both directions. I snapped this picture after they crossed. 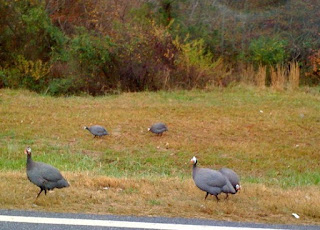 “Is all of this going to appear in a blog?” my daughter asked.

The early chaos was in no way a predictor of what turned out to be a wonderful day with family. Of course, more animal dilemmas were ahead, because my sister has three dogs of her own, Lily the cat, and a new feline who seems to have selected my sister’s home as her own domicile.

I have a friend whose husband used to say she was going to be like the old woman who lived in a shoe, but instead of children, she’d have so many cats she wouldn’t know what to do.

My cat-loving friend said, “I thought that sounded like a good thing.”

This same friend sent me a card picturing a woman in a house with about twenty cats. Cats, cats, everywhere. I thought it was wonderful. Jerry, said, “You notice there’s no husband in that picture.”

Maybe, I’ve said this before, but as you can see, we’re doing our part in taking care of creation. I hope you are. (Did I mention we’re making friends with another feral cat?)

Life is never simple with this many critters around, but there’s never a shortage of joy either.

At least most of the time.

So, on my thankful list are all these creatures God has sent.

When I made that thankful list I wrote about a few days ago, I was surprised at all the prayers God had answered over the past year. One very special addition this year is all of you.

The apostle Paul said, “I thank my God every time I remember you.” (Philippians 4:3) That’s what’s in my heart when I think of you friends and readers. So, thank you for joining me on this writing journey at “One Ringing Bell.”

To start the Advent season, next, I’ll be sharing a story I wrote featuring characters from my novel, “Coming to Currahee.”

Many blessings.
Posted by Beverly Varnado at 5:25 PM