Yesterday morning, my husband, Jerry, and I took a little out-of-town excursion and wound up eating breakfast at a Cracker Barrel along an interstate highway. As the host seated us, I wondered why she took us past so many empty tables to the back of the restaurant. Just as we were about to take our seats, though, I caught a glimpse of a woman seated next to us, who seemed very familiar.

As I sat there, trying to place her, Jerry leaned back in his chair, and when he did, he saw the woman’s husband.

“And that’s Allison,” I said as the light finally dawned. “What are they doing HERE?”

Dr. Mark Rutland and his lovely wife, Alison, now live in Tulsa, Oklahoma, where Mark is the President of Oral Roberts University. These precious people played a significant part in our early walk with the Lord. Through couples conferences, revival meetings, and what often turned out to be just the word we needed—the tape of the week, we grew under their ministry. We hadn’t seen them in years, but followed their ministry through mailings and Christmas cards. 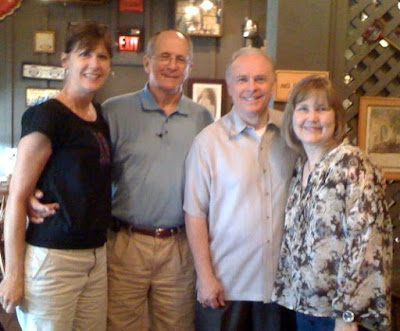 Now, hundreds of miles from home, what WERE they doing in this Cracker Barrel?


Jerry smiled at Mark, and it took a few moments for our decades to peel away.


“Oh,” Mark said, “I didn’t recognize you at first, Jerry.” But, yes, he remembered the lawyer who would become a pastor, who showed up at the altar at almost every revival Mark preached in his early years as an evangelist.

After we greeted each other, we had to ask. “Why are you here?”

Turns out their son, Travis, has just taken a position as pastor of a church not many miles away in…get ready…my hometown. In fact, not just the town I grew up in, but if his son were to walk out in his parking lot, he could see the back yard of the house where I was born. All of this stirred my heart, and what came so strongly to mind is something God showed me just months ago.

I don’t often get to visit my birthplace, just a few times a year, but on the last visit, I noticed a dramatic increase in the number of churches there. Within a half-mile distance, I counted maybe nine churches, most begun in recent times. And that didn’t even take into account others scattered throughout the little community. The town has such a Godly history through the work of many including R.A. Forrest and R. G. Letourneau, that I’ve often wondered if God might do something extraordinary there, but when I saw all these new churches, the sense of that became even stronger.

Now, he was sending the son of this wonderful couple to pastor there. Again, I sensed God powerfully at work.

We didn’t have much time to visit, as they were on their way to visit their son, but it was just enough time for me to feel God’s smile. Jerry and I marveled at what it took to orchestrate that meeting. We were at a place, to my memory, that we have never been on a Friday morning, and I’m pretty sure the Rutlands have never been either. They were just leaving, so five minutes later, we would have missed them, and of course, there’s that host who determined to plant us deep inside the restaurant. Then, to find out their son is serving in my hometown. Well, I just don’t even know what to say, except God is up to something.

It's definitely a matter for prayer, and my heart bursts with joy this morning at the prospects.

Please check out the Global Servants website which the Rutlands still oversee. Their ministry spans around the globe.

"There is one body and one Spirit--just as you were called to one hope when you were called--one Lord, one faith, one baptism; one God and Father of all, who is over all and through all and in all" (Ephesians 4:4).

Posted by Beverly Varnado at 9:18 AM

What a blessing! God just smiled on you. :-)

Oh, yes, Vonda. It sure seemed that way. You've come to mind so often, and am praying you're improving everyday.

What a blessing! I remember all our trips together to hear Mark and Les ~ wonderful, blessed times!
I love how God orchestrates these "coincidences" to bring delight into our days! Loved seeing you unexpectedly last year at the 5 Browns concert, and just this morning I ran into Jerry in Walmart, and my day of errands turned into a time of sharing with a dear friend. God is so faithful to remind us of those we love, even though our physical paths so seldom cross.
Linda

Sweet memories, Linda. Glad to hear you and Jerry had a chance to catch up and hope it didn't turn into an "organ recital." We've had one of those years. Hope you and I can have a "coincidence" sometime soon. Blessings, Bev