A Poem and Wonder in Valdosta

The night before the Valdosta book signing, our friend Nancy, in whose home we were staying, said to my husband Jerry, “Did you have Betty Googe as a teacher in high school?”

Jerry had attended high school in Valdosta. “I can’t remember if I did or not,” he said, “but the name does sound familiar.”

“I’ve heard she might be coming to the signing,” Nancy said.

Sure enough, Betty Googe arrived the next day, and almost immediately made it clear she wanted to see Jerry Varnado. So I called and told him that a command performance was expected of him.

He arrived and sat down beside Mrs. Googe. As they bantered about when he graduated, when she taught and other details, Jerry turned to me and said, “She’s the one.”

“The one I told you the story about. You know--the poem.”

Jerry has shared many times about an experience he had as a junior in high school. His English teacher became seriously ill, and a young practice teacher came and took her place. After only a few weeks, Jerry became smitten with this young teacher, so he wrote a poem to impress her. The young teacher thought it such an excellent poem, she gave it to the school newspaper to be published.

As you can imagine, South Georgia teen boys did not exactly hold poetry writing in high esteem in the mid twentieth century, so when the paper came out, Jerry’s peers joked him about it.

In retelling the story to me, Jerry could never remember the teacher’s name or anything about the poem, but as he sat face to face on the seat beside Mrs. Googe, he realized that she was the one he’d been so enamored with as a sixteen-year-old boy, that he’d taken up poetry.

I watched them, the teacher and the pupil reunited after all these decades. They were once more at Valdosta High where under her influence even the tough high school football player might turn to rhyme to catch her attention. 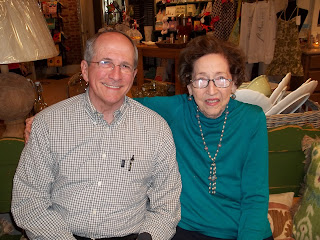 I realized that, though Jerry and Betty Googe had been brought together by an event for a book I’d written, the scene unfolding before me had nothing to do with me. The pen of a mighty Hand had scripted it long before any of us were born. Truly a gift of wonder to all that were privliged to witness it.

In Mark 7:37, we find these words about another wonder Jesus had wrought, “People were overwhelmed with amazement, ‘He has done everything well,’ they said.”

He has, indeed, done everything well.

Now, if we could just find a copy of that poem.
Posted by Beverly Varnado at 7:36 PM

Email ThisBlogThis!Share to TwitterShare to FacebookShare to Pinterest
Labels: Mark 7:37

What a wonderful story! Should be submitted to something for publication...sounds like a great devotional to me! Love you, Freida

Thanks so much, Freida. This story was such a gift.