Often, we can’t even imagine what God might do.


A recent development has sure left me like a deer in the headlights.


I sat at my desk a cold winter eight years ago hammering out the script for Give My Love to the Chestnut Trees which would also become a novel. In addition to the main character, a young teenage girl, Mary Helen, I imagined her mentor, an eccentric artist, Aunt Laney, who painted large canvases of marsh scenes.


To my utter surprise, that novel and script went on to win several awards and was optioned for a movie. A year ago, I thought we had the green light for production and went into something of a panic, because sadly, the woman we thought might do the paintings for the movie developed serious health problems and had to step out of the project.


Though I was an art major and had imagined all these paintings, I felt wholly inadequate to produce them myself. I’d only done small watercolors since college, and these paintings should be oil. And they should be big. But I needed to make sure the paintings fit the concept I’d hoped for and with an independent film production, the budget would be limited to hire someone else to do them.  Oh, my. Could I really create these paintings? I had serious doubts, but just like many years before when I wondered whether I could be a writer, I heard God say, “Just start.” So I did. As I was making some progress, I learned the movie project had been put on hold. Again.


Seriously. What was this all about?

I wanted to quit with the painting. Why should I continue? But somehow with God’s help, I kept going and produced about a dozen paintings over the course of the year―marsh related scenes and other subjects,  often painting with a heavy heart because of my dad’s illness and death. 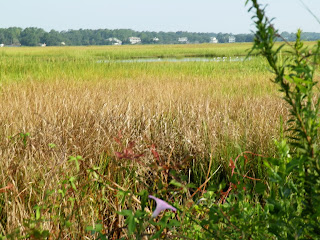 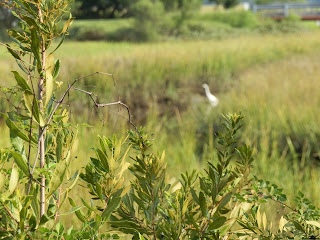 I saw a notice in January about a juried exhibit selected from an arts foundation membership, which I’d recently joined. The exhibit would be held at a nearby state university gallery, but it seemed implausible my work could be chosen―the artists chosen for the exhibit the prior year were outstanding.  I felt out of my league. But I thought I should at least try. What did I have to lose? One thing about the writing life, it gets you used to rejection. So I sent in three images ―one of which was a painting I did from Give My Love to the Chestnut Trees.


Well guess what? I learned last week, the painting from my book was chosen for the exhibit― an underwater scene of a blue crab. Crazy, right? It started as a thing imagined for a story, but now, just like the paintings of the fictional Aunt Laney, it’s going to be hanging in a gallery for the entire month of March.


Please don’t hear me bragging. When I wrote the story, I never, ever thought anything like this would happen. This whole business brings tears to my eyes because it is clearly an example of "Him who is able to do immeasurably more than all we ask or imagine”(Ephesians 3:20).


So, whatever thing God has planted in your heart, just keep at it.


With God’s help you can do what you never thought possible.


I’ll  try to share links to the exhibit when they become available.

Posted by Beverly Varnado at 9:58 AM

LOVE this! So encouraging, Beverly!! And I'm smiling, big time :)

Encouraging to me, too, Julie. So thankful.

Thank you, Angel. Love you right back.

So proud of you, my friend!! Much love!