Going on an adventure

“Guess what I’m doing next week?” my daughter asked soon after she arrived for Easter weekend. We sat down at the kitchen table. I kind of braced myself knowing how these things can go.


“I’m hiking up to one of the highest peaks in the Appalachian Mountains.”


I straightened the placemat and tried to keep my game face. “With who?”


Turns out, she’s going with a friend who has hiked the Himalayas.


I should be comforted by this other woman’s experience, and I am, but these things still stretch me to the end of my mama nerves. So many of you understand this and are dealing with issues far greater than mine with kids in the military, on foreign fields, or into extreme sports in a big way.


I shouldn’t be surprised at my daughter's announcement. Given my children’s gene pool, there was ample precedence to believe they would be adventurers.


The man I married has fished the deep seas of the Atlantic for Marlin. He has rescued leatherback turtles on the sands of St. Croix. He has hunted wild Russian boar in the swamps of South Carolina. He has skied the black diamond slopes of Colorado. He has waded the trout streams of North Georgia with a fly rod in his hand. He has soloed in a Piper Cub across the clay hills of his Southern home. He has hiked the Appalachian trail and into the wilderness of Yellowstone (On this particular jaunt, he never saw another person for four days and later found he camped among the biggest movement of grizzlies in years). He has waited at dawn for the first movements of turkey or deer and watched for ducks to come in on the water. He has stepped out into a football stadium with 50,000 people cheering him, and played with Bill Stanfill and George Patton and against Joe Namath.


This train was coming down the track, for sure, but that doesn’t make it less of a challenge. The area my daughter hikes will be isolated. No cell phone access. And did I mention bears? Who knew I would go from putting her in pink dresses with lace collars to making sure she has bear mace with her?


Two women in the wild.


I won’t hear from her for three days. 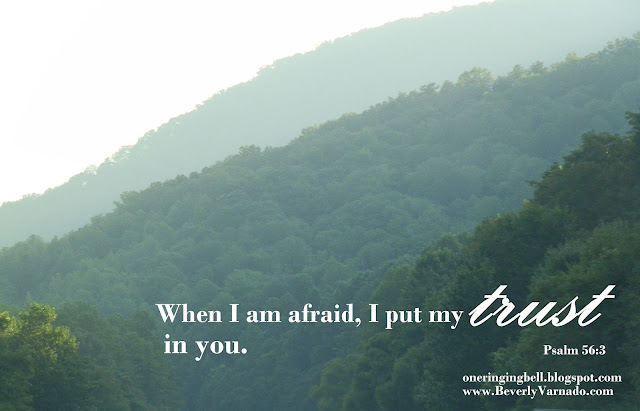 The Psalmist wrote these simple words, “When I am afraid, I put my trust in you” (Psalm 56:3). That word trust in the original language has these variations of meaning:  to be confident, sure, bold, secure, to feel safe.


Will I choose to be sure, bold, and secure in trusting God to watch over my daughter?


I have a sense my confidence in her safety will only increase as I do.


As I think about this, it looks like we’re both going  on an adventure. I'd love to have you come with me on this trust journey.

Posted by Beverly Varnado at 9:11 AM