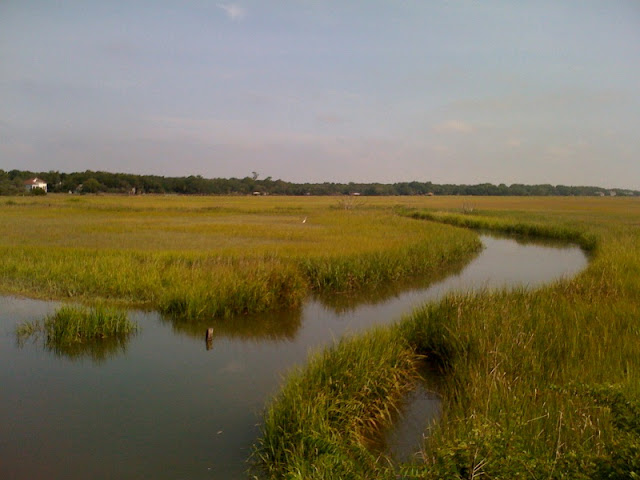 My husband, Jerry and I recently returned from a few days on one of our favorite barrier islands. I don’t know what it is about the narrow strip of rivers and marsh which separates the main land from the mound of earth called St. Simons. All I know is the moment I hit the Torres causeway leading to the island, troubles start to slide right off me.

We attended a touching wedding while there and as always loved the opportunity to be part of such a special day. We brought our bikes and on our last day after breakfast, we took the long way back to the hotel. We passed a bird watching type standing by his bicycle at the edge of the marsh. When I saw him, I scanned the trees for a painted bunting, the bird I thought at the top of my “most want to see” list. Maybe this man had sighted the brilliant elusive fowl. But as we continued along the marsh, I realized he had been looking up, so I stopped my bicycle and turned my eyes skyward.

There silhouetted against the cloud dotted heavens, I saw him—my first Eagle.

Oh, I’ve seen Eagles before—rescued Eagles in zoos standing on wooden perches unable to fly, eyeing their onlookers with justifiable suspicion. But, I’d never seen one like this--majestic, swooping, wheeling, surveying a vast kingdom over which he was the undeniable feathered head. The seven to eight foot spread, white head and tail made for an unquestionable spotting.

I did a little research and found east of the Rockies, the bald Eagle only inhabits the Great Lakes Region, northern Maine, the water’s edge of the Eastern Seaboard, and Florida. My lifelong habitation in the foothills of the Blue Ridge accounts for my never having seen one in the wild. My sighting made me think of a John Denver song. To avoid any copyright infringement, I’ll paraphrase. The line I’m thinking about refers to a person being impoverished if they’ve never seen one of these majestic birds on the wing. Now, I understand more fully what Denver meant. I still want to see a painted bunting, but no bird could compare with the Eagle.

I also have a deeper understanding of Isaiah 40:31, “but those who hope in the Lord will renew their strength. They will soar on wings like eagles; they will run and not grow weary, they will walk and not be faint.” I’ve quoted that verse so many times, but now I have a real picture to go with it. If we put our trust and hope in the Lord, we’ll be the ones swooping and soaring as well as running and walking with strength and endurance.

I wish I’d had the presence of mind to take a picture, but I was so awestruck, all I could do was gape. But the mighty Eagle will continue to fly in my memory, and when I find myself growing weary—I’ll remember those few moments we had at the marsh.

This is just one more reason I love that island.
Posted by Beverly Varnado at 7:13 PM