Deer and My Son 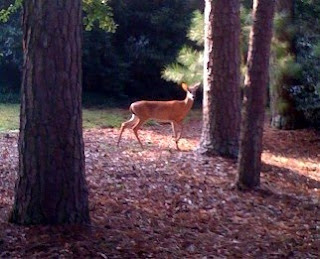 I ran into this lady Monday while out walking. She studied me closely for a few minutes as I reached for my cell phone camera. She and several of her relatives peruse the shrubs and flowers in our neighborhood, gnawing them to the ground. It hasn’t made for good will among some, but she can have mine. I’d rather lose the shrubs and keep the deer.

Wildlife sightings have always been big at our house. We just about jump out of the car when a red tail hawk swoops across the road or we spot a bushy fox tail flicking as it runs for cover. Our top two sightings are a rare mountain lion in the foothills of the Blue Ridge and the pièce de résistance-a grizzly in Yellowstone Park.

Both of my children have always taken a strong interest in the animal kingdom. My daughter recently helped raise an orphaned baby squirrel named Freida to adulthood. My son has across the years kept various snakes, lizards, and frogs in the house. Even when he was tiny, in addition to the several cats and dogs romping through the house, he also played with mammal and reptile replicas. I got so used to seeing plastic snakes strewn around, when a real snake got loose in our house, it took me awhile to realize what was going on.

That’s why it’s no surprise he’s packing his bags today and headed for the University of Georgia where he’ll be a freshman majoring in Wildlife Biology at the Warnell School of Forestry. When my husband and I toured the school with him for freshman orientation, we found it so fascinating we both wanted to enroll ourselves.

All this is great. It’s what we want. It’s the fulfillment of his dreams. But it’s also one of the hardest days of my life. Ever since my kids were born, I would drift off to sleep at night thanking God that I knew exactly where they were, and that they were safe. I knew the day would soon come when I would not know exactly where they were, and at that point it would be faith alone in God’s care for my children that would help me close my eyes and rest.

That day is here.

So today by faith I send him out trusting in the only One who loves him more than I do.

Mommy! you spell it Frida, after Frida Kahlo :)