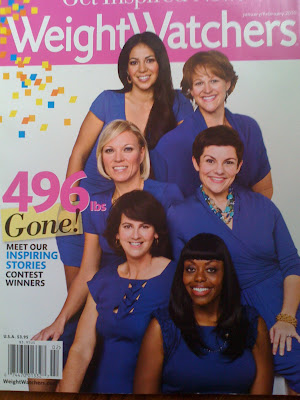 Since January she’s been interviewed by many reporters about her story including folks like CNN and the Atlanta Journal Constitution. Just last week Weight Watchers posted an interview and video of her on their site. The link is http://www.weightwatchers.com/success/art/index.aspx?SuccessStoryId=11251≻=17. Or you can just type in “Tammy, 2009 inspiring stories” in the Weight Watcher’s Search box.

She’s not only maintained her weight, but also lost an additional 10 pounds beyond her goal weight. But what you read in the magazine and online is not the whole story.

At some point in the year preceding her weight loss, she found herself just trying to cling to what she felt she had left in her life. She’d had a successful career as an educator, having been up for state teacher of the year, but rarely does anyone ever get those kinds of accolades twice. It seemed at that point her career might be winding down. Her only son was headed for college. And then there was the weight issues she’d been plagued with her whole life. Weight issues she could never seem to conquer. She says she was up to that point a "Weight Watchers drop-out." She remembers walking into her house one day praying, “I’m just trying to hold on to what I have.” What she heard next stopped her in her tracks.

“What if I want to give you more?”

If you watch the video of my sister, you’ll immediately recognize her humility, so she’s not the kind of person to walk around asking for more. But more, is exactly what God wanted to give her.

Within a year she began her weight loss journey. About the same time she was recognized for the second time in her career as “Teacher of the Year” for her school and her county which put her in the running once more for state teacher of the year. Though she did not receive the state award, she felt honored to make it that far again. A few months later, her Weight Watcher’s leader asked her to submit her story to Weight Watcher’s Inspiring Stories. Later, out of thousands of entries across the country, she and five others were chosen.

So many have emailed her, contacted her on Facebook, or called to tell her how much her story means to them.

Her story has inspired me as well. When I’m carrying on in my maintenance mode, God is whispering more. More of him, more alignment with his purpose, more of his glory in me, more hope…more.

“Now to him who is able to do immeasurably more than all we ask or imagine, according to his power that is at work within us…” Ephesians 3:20
Posted by Beverly Varnado at 4:20 PM

I could hardly wait to see a picture of Tammy. It has been 30 (? or more years since I have seen her.

We moved from Toccoa in 1976. I enjoy reading your blog and all the things that you are doing.

I can't wait to show Dale the picture of "Tamera Babs" from the Meadowbrook days.

Oh, Sheila, what a lovely surprise to see your name pop up in my inbox. I remember you folks well, and it's wonderful to connect with you after all these years. I have already passed along your message to my sister. Please give my best to Dale. Many blessings, Bev