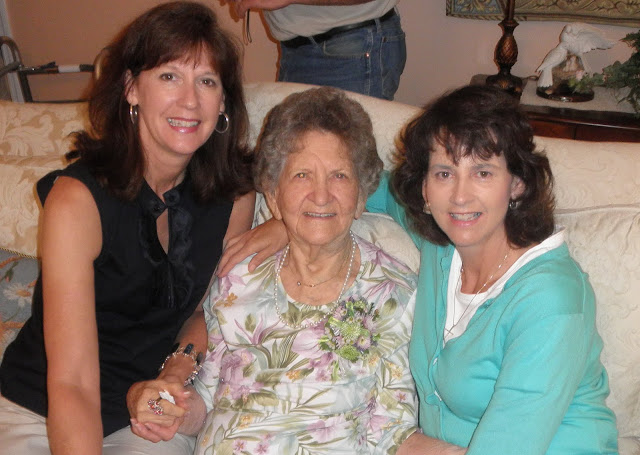 I recently attended my Aunt Nell’s fabulous ninetieth birthday party. (pictured here also with my sister) Nell is of that generation called “Great.” Like others in her demographic she’s lived through the Depression, the Second World War, the Korean conflict, Vietnam, and now the first and second wars in Iraq. In addition to the troubles those world events brought about, my aunt has also suffered many personal difficulties. She began having heart attacks in her forties, and has had multiple open-heart surgeries as well as other health problems. She’s survived the deaths of two grandchildren and her husband. Some might have felt sorry for themselves and given up along the way, but not my Aunt Nell.

At seventy-nine, she acquired her high school equivalency degree, and learned how to use a computer. She discovered a love for writing during her studies and chronicled her family history. All her life she’d wanted to sing, but family obligations kept her from her dream, so in her eighties she began singing in a trio traveling to other churches and singing in her church’s denominational gathering. Up until very recently, she’s mentored young women, sharing how she won her husband to the Lord through prayer.

In one of the most memorable conversations I ever had with her, I asked how she kept up her hope through so many difficulties. She said, “Honey, we can sit around and think about all the bad things. That’s just depressing. I don’t study on the bad things; I study on what’s good.”

I looked up the word “study.” Webster defines it as, “Give careful attention to something.” In my perfectionist way I’ve often been guilty of giving my careful attention to the one bad thing rather than the host of beautiful things. Philippians 4:8 says, “…whatever is true, whatever is noble, whatever is right, whatever is pure, whatever is lovely, whatever is admirable—if anything is excellent or praiseworthy-think about such things.” Sometimes we can’t seem to stop thinking about the bad stuff, but what we can do is make a deliberate effort to substitute those thoughts with ones of what is true, noble, right, pure, lovely, admirable, excellent and praiseworthy. Sometimes I even make a list to help me refocus.

Aunt Nell’s eves have now grown dim with almost complete vision loss, but I watched in amazement at her party as she recognized many she hadn’t seen in years simply by the sound of their voice. As much as everyone who came wanted to give her joy on her birthday, I think we were blessed even more.

I hope I’m getting better in studying on the good things due to my Aunt Nell’s influence. My mother always said I’m just like my aunt, because I have the same nervous energy and can always think of a thousand things to be doing.

I sure hope my mother was right.

Posted by Beverly Varnado at 11:53 AM

Granny (Nell) is an amazing woman! She is still spunky despite all of her ailments. She is an inspiration to everyone with whom she comes in contact.