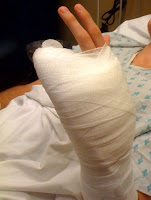 I’m a little behind on blog posts because as my husband would say, “we’ve been up to our eyeballs in alligators.” One of the alligators is pictured at right--my son’s very swollen, bandaged hand. In his second week at the University of Georgia, he fell climbing into his dorm loft bed with wet feet.( I thought that bed was too high) I know what some of you may be thinking, but no, he’d been at our house that evening. After almost a whole day at the emergency room we found he has a hand bone broken in two places and a corneal contusion. His eye is completely swollen shut.

Tomorrow he’s having surgery to have pins inserted to bring the broken bone back into alignment in his hand. Fifteen years of soccer with relatively few injuries and he falls climbing into bed. Puzzling.

Just days ago I wrote about praying the scripture from Psalm 121:8 that God would keep my son from all harm and watch over his life. Now this. Did God nod off?

No, he didn’t nod. He saw this coming long ago. Beth Moore says if God doesn’t give you what you want, he gives you something better. I believe that. And I believe that my son’s injuries could have been so much worse. He could have had a serious head injury. He didn’t. He could have been blinded. He’s not. He could have lost the use of his hand. He didn’t. Romans 8:28 says “And we know that in all things God works for the good of those who love him, who have been called according to his purpose.” I don’t know why God allowed this fall, but I know he will use it. So, I have my eyes set on the something better God is going to bring from all of this.

I'm reminded of the words of that great philospher Roseanne Roseannadana: