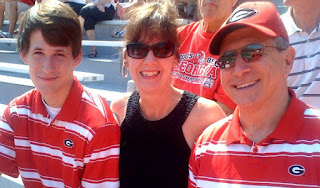 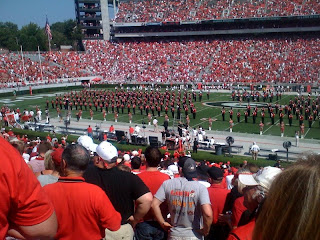 On Saturday, even though the hot sun bore down on Sanford Stadium, it turned out to be a dark day. I was there for the Arkansas Razorback’s defeat of our Georgia Bulldogs. Well, there until the third quarter, at least. I confess because my nephew plays trumpet in the Redcoat Band, the main event for me is half-time. I left shortly after the band played and didn’t see the Bulldogs rally late in the game—a rally which raised the hopes of loyal Dawg fans, but wasn’t enough to stop Arkansas’ final game winning score.
The headlines in a local paper read “Razor Burned.” Witty, but since my husband used to play football for the University of Georgia, the headline was not well received at our house. Yes, a Georgia loss almost feels like a personal loss here and is always followed by a period of mourning and a lengthy armchair discussion of what might have turned things around.

There’s one thing about losing that we really need to latch on to, though. At times in life, it may feel like we’ve lost not only the game, but also the whole season. When we’re down for the count, that’s when we have to reflect on what’s important. And what’s really important are the things that last—eternal things. Paul said to the Romans in verse 8:18 that “I consider that our present sufferings are not worth comparing with the glory that will be revealed in us.” In other words as the Message says there’s no “…comparison between the present hard times and the coming good times…”

I’ve had a good many losses in my life, and I try to remind myself of this truth. It helps me to reframe the losses—to see them from a different perspective. It helps me keep up my hope.

The Bulldogs are headed off to Starkville next Saturday for the Mississippi State game, and we’ll be cheering them on via television. I’m hoping for a big win, but in the event Georgia loses, I’m going to TJMAXX. I’ve learned it’s best to let the dust settle before I start quoting scripture.
Posted by Beverly Varnado at 11:50 AM