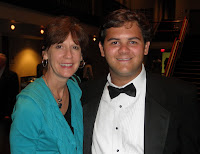 Granted, I may be a touch biased when it comes to Christopher, but I thought the concert was fabulous. An accomplished trumpet player, Christopher also plays and is a section leader with the storied University of Georgia Redcoat Band. It’s been interesting to watch the development of Christopher’s musical skill through the years, a journey which has included many awards. From all outward appearances, his success came easy to him. But I know the whole story.

You see Christopher was born with serious respiratory problems. His first weeks and months on the planet included several hospital stays, lots of medicine, and intensive nursing. Sometimes, my sister would have to sit by his bedside while he slept to check for his breathing problems. Many people prayed for him. In the years following, he would continue to have respiratory problems, which were only relieved by the extensive use of prescription drugs. More prayers went up.

Christopher’s love of music evidenced itself early as he was hardly ever seen as a child without some sort of musical instrument in his hand. He’d often direct his own imaginary orchestra when he saw Mickey Mouse directing on Walt Disney’s Fantasia. At first, it seemed Christopher’s main instrument would be the violin, but as he approached middle school, he switched to trumpet. We all wondered if he wouldn’t be more successful with the violin because it didn’t require lung exertion, but he was insistent the trumpet was his instrument. And so, the trumpet it was.

The instrument required hard work, especially for him. Practice, practice, and more practice. All the while lung function tests never reached the normal range. He played faithfully in church and school through the years, and in high school, we were excited when he made the Georgia All State Band as a sophomore. However, his junior year, we learned after his audition for All State that he did not make the cut. At first devastated, Christopher came back and soon redoubled his efforts, as we continued our prayers. With the help and encouragement of his high school band director, Scott Wilcher, and his dad, Foy Todd, also a former music major, he made it his senior year. Not only did he make it, but chosen from among thousands, he received the honor of being selected first chair trumpet in the prestigious Georgia group.

Now, he’s a senior in music education at UGA. He’s headed toward graduate school and his lifelong dream of directing a band himself. And his lung function—it’s normal. That doesn’t mean he’s medicine free--he’s not. However, he’s light years away from those early struggles. You see the thing that was the hardest for Christopher to do, was in fact the thing that helped bring the most healing to him. All that blowing for all those years strengthened his lungs in a way hardly anything else could.

It’s true in so many ways that the hard thing heals. Sometimes, I don’t want to hear that, but experientially I’ve found it to be true. I could make a list from my own life. The challenges I've most resisted often wound up being the things that rescued me in the end.

I’m putting out a new picture this afternoon of my trumpet playing nephew and giving thanks for all that God has given to him and through him. And I’m reminded once more of Romans 8:28 “And we know that in all things God works for the good of those who love him, who have been called according to his purpose.”
Posted by Beverly Varnado at 3:25 PM