My husband, Jerry, is a big NCIS fan, so he’s seen all the episodes. More than once. Most more than twice. That’s why he was so excited before I left for this year’s Gideon Media Arts and Film Festival (www.lifeway.com/gideonmediaarts) because the keynote speaker was Muse Watson (www.musewatson.com) otherwise known as the character Mike Franks on NCIS. 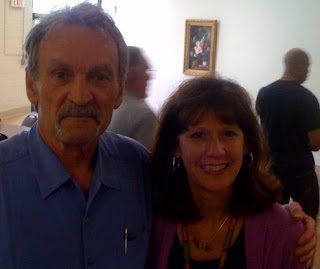 As you might guess, Muse was a popular person at the conference, but I had the privilege of sharing lunch one day with Muse and the conference directors, Lori and Rodney Merritt. Muse is quite a storyteller, and regaled us with several tales which we all loved.

What really touched me, though, was Muse’s keynote address where he humbly shared the story of his recovery from alcoholism--how his sister and her husband (who were there that evening) helped him find his life again. I had an opportunity to speak to his sister later who, as you might guess, is so proud of her brother.

Sometimes it’s difficult to keep up your hope for someone who’s caught in a terrible cycle of destruction. It’s hard to believe for a wonderful outcome. I’m sure in that agonizing time when Muse struggled, his sister and brother in law might have had trouble even imagining his wild success today, but they didn’t give up. They kept loving him and hoping for him to break free. And Muse did break free.

Muse’s story is such an encouragement to me. I, like probably everyone reading this blog, have had situations that seemed to have no resolution. My hope has wavered, but I've tried to remember God is bigger than just today. And he’s bigger than any seemingly impossible situation we may face. Jesus said, “What is impossible with men is possible with God.” Luke 18:27. Sometimes it takes longer than we want for the tide to turn, but I’m thankful for the truth that nothing is beyond God’s reach.

So, the next time you hear Mike Franks call Gibbs, “Probie,” be encouraged for those who struggle in your life. Armed with this new information, my husband now has an even better reason never to miss an episode.
Posted by Beverly Varnado at 2:58 PM