A Bovine Beauty and Bad News 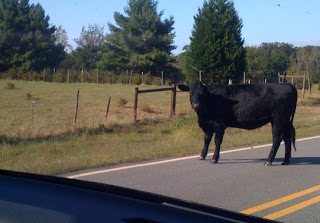 On our way out of town yesterday, we had an encounter with this bovine beauty who obstructed our path for quite some time. She’d escaped from her pasture, and just moments later, many of her friends and relatives joined her in this afternoon excursion—cows, cows everywhere. We were running late for an appointment, but found ourselves knocking on nearby farmhouse doors to see if we could find the owner of all these cattle. I'm not any kind of country girl, but we just couldn’t leave them to be lost or hit by a car.


Getting a cancer diagnosis is like other “bad news” kinds of things. It feels like a big cow in the road that you can’t get around—no way to move forward or make plans. The day after I found I had cancer, I was scheduled to speak at a service in a women’s prison. In finalizing my message for the women that evening, I realized we had a lot in common. My life as I had known it was coming to a halt for a season so I could deal with this cancer, just like their lives in so many ways had come to halt. Also like some of them, I found that within the confines of what seemed like a very small space, God was at work.

Isaiah 45:3 says, “I will give you the treasures of darkness, riches stored in secret places, so that you may know that I am the Lord, the God of Israel, who summons you by name.” I believe I’ll always mine from the wealth God has given me through that which from all appearances seemed like a dark time. But in fact, his presence and voice have never been more real to me than in days of complete and utter dependence on him . My prayer is that I would live in that presence every day.

We eventually found the cows’ owner and went on our way. Our destination was a women’s prison where we were ministering that evening. I was thankful I could enter that facility with so much hope because of what God has brought out of my own confinement of cancer.
Posted by Beverly Varnado at 4:26 PM