The Five Browns and Self-Discipline 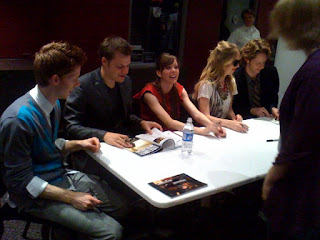 I recently had the opportunity to hear the 5 Browns in concert. I don’t know if I have enough adjectives to describe the stunning, exhilarating, moving, engaging, amazing sound bursting from the five Steinways on stage. According to their website, the 5 Browns were the first group of five siblings to be admitted simultaneously to Julliard. With only a six and one-half year span of age from the youngest to the oldest, their talent seems equally matched. The 5 Browns actually were only 4 Browns the night I saw them, because Deondra was back home about to deliver a baby. However, their arranger, Greg Anderson, whom they met at Julliard, stepped up to the plate in a more than capable way and seemed to merge flawlessly into the flow of flying fingers as the young pianists circled the keyboards of pianos sans fallboards.

At intermission, I ran into a friend who is an accomplished musician herself, and we were marveling over the talent of the 5 Browns.

“Isn’t it amazing” she said, “that God could give them the discipline to develop their talent in this way?”

I did find it amazing. Discipline is a word that doesn’t usually give me a warm, fuzzy feeling. The words hard, long, and tedious more aptly describe what comes to mind when I think of discipline.

2 Timothy 1:7 reads, “God did not give us a spirit of timidity, but a spirit of power, of love and of self-discipline.” I can only wonder what God might accomplish in my life if I allowed Him to work fully the self-discipline he desires for me in the spiritual realm.

I know it doesn’t happen all at one time. When I’ve had to recover from surgery, I did it one small step at a time. Initially painful, the discipline of exercise strengthened the weak muscles and in time, I, found myself strong again.

It gives me a good picture of what God could do in the spiritual muscles in me that are weak. And when I remember the soaring sounds of the 5 Browns, I hear even the music of self-discipline.
Posted by Beverly Varnado at 11:46 AM