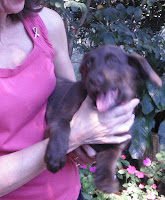 I thought I’d get a photo of our puppy, Lucy, in her new pink Breast Cancer Awareness collar. But maybe not. As you can see, the photo shoot didn’t go too well. Lucy is only motionless when she’s sleeping. She’s really helped me bump up my heart rate when we go for a walk, though.

“Can’t you make that dog stay still?” Jerry said. “How can I get a picture when she’s writhing?”

“I’m trying,” I said wrestling with the dog as she gnawed on my arms.

Jerry snapped the picture a second too late—again. “I told you we should have gotten an older dog,” he said frustrated.

Right, but Mr. Marshmallow caters to that dog as if she was one of the children, because Lucy makes us smile, and we adore her. She, however, has returned our affection by chewing, shredding,  gnawing, and pretty much destroying anything her little baby teeth have touched. And she knows the moment a twig falls from one of the trees in the backyard, too,  because within minutes it’s lying at the back door. By the end of the day, it looks like we’re about to start a campfire on the doormat.

In fact, I’m glad we now have a battery-powered blower, because every morning, and I do mean EVERY morning, I blow off Lucy’s collection from the day before.

“Why don’t you buy that dog some chew toys?” I hear you say.

(…patiently clearing throat…) She has a stuffed man, a squirrel, a chew bone, an assortment of balls, a toy dog, and a plush tiger. But she’s definitely demonstrated an affinity for more organic material.

And speaking of organic material, did I mention we’ve had a little trouble house training her?

As I write, Lucy is curled up in one of the patio chairs. Since a puppy, she’s preferred human seating to the standard dog accommodations. We really didn’t name Lucy after the character Lucy Ricardo; it's just the only name on which the kids could agree. But, Ricky’s comment to Lucy has come to mind many times. I’m pretty sure as the years roll by that our Lucy is often going to have some 'splainin’ to do.

I have a lot of mercy for her, though. I’ve felt I had to do a good bit of explaining myself because of the messes I’ve made in my own life. I’m thankful that “…where sin increased, grace increased all the more…” (Romans 5:20) because of what Jesus did for us. It’s so good to know God can make something good even of the awful stuff I've left by His door.

Now, has anybody seen my purple slipper? Lucy…
Posted by Beverly Varnado at 3:51 PM