Recently, I sat in my living room early one morning pondering. It’s where I do my best meditating, because it’s the one room in the house which usually remains clutter free—nothing to pick up, straighten, or clean. It’s the place I land to have time with the Lord. There I was in front of two large windows trying to allow some truth of God to soak into my spirit, and then I saw them. 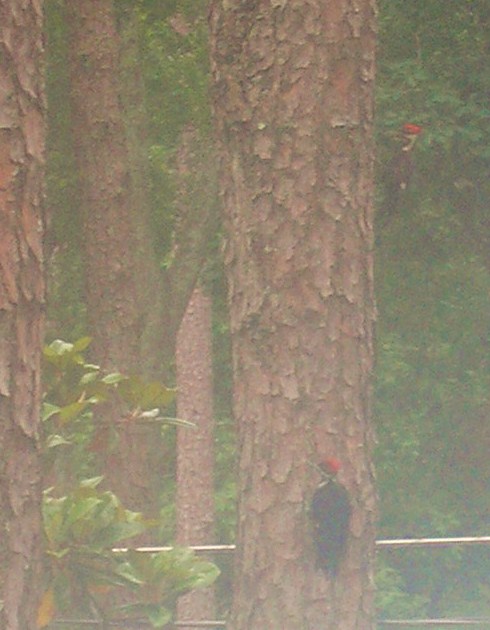 Pileated woodpeckers. Not one, but two. In my whole life, I’d only seen a Pileated twice before. Here, right in front of me, were two of those gorgeous things. The Peterson Field Guide says it is “A spectacular black crow sized woodpecker with a flaming-red crest.” Spectacular is the word. The woodpecker measures from sixteen to around twenty inches tall. They are the grandest woodpecker east of the Rockies. Well…the grandest except for the Ivory-billed which was long thought extinct. However, I heard an exciting report not too long ago on NPR, which indicated new sightings have been made recently.

Anyway, here I was just pondering, and God sends these two visitors. For a few moments, it was just God, the woodpeckers, and me. Then I ran for my camera and went outside. I snapped a few not so good pictures and stared for a long time.

In a Bible study the other day, I mentioned the Psalmist’s cry from Psalms 86:17, “Give me a sign of your goodness, that my enemies may see it and be put to shame, for you, O Lord, have helped me and comforted me.” We were talking about small miracles, if there’s any such thing, and I said I felt that day when the woodpeckers appeared was a small miracle—a sign of His goodness. It seemed God said, “I’m here with you. I just wanted to make you smile.”

The woodpeckers might not have been a big deal for anyone else, but for me they were a huge deal--because I love them so, and of course God knew that. As I look back, especially during the difficult times like when I had cancer, I can point to similar signs of God’s goodness—so many touches (or swoops )of His grace that let me know He was with me. Truly, he uses these divine touches to help and comfort us.

I’ve not seen the woodpeckers again, but I keep listening for their loud, irregular peck, peck, peck in hopes of an encore. I wouldn’t be surprised if they do itinerate back this way. I think God loves an encore, too.


Posted by Beverly Varnado at 5:16 PM