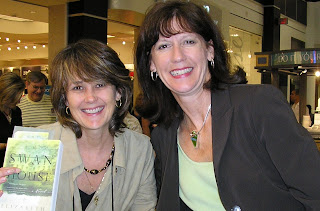 Several years ago, a friend suggested I read a book entitled Swan House. It turns out the author, Elizabeth Musser, has become one of my favorite writers.

Elizabeth has an unusual story. With an upbringing in the elite Buckhead section of Atlanta, and schooling at the prestigious Westminster Schools then later at Vanderbilt University, she seemed an unlikely candidate for what came next. God called her to missions—something that had never been on her radar screen. But she followed the call, and she and her family have now lived in France for twenty years as missionaries. She'd had a desire to be a writer since childhood, and after moving to France, even with the challenges of raising small children in another culture, somehow Elizabeth continued to write. Fifteen years of diligent work and prayer passed, then finally, she saw her dream come true when she was offered a book contract in 1994. According to her website, she’s since had seven books published.

Since I’m blogging everyday in October for Breast Cancer Awareness, you might be asking what this has to do with BCAM? In Elizabeth’s bio she writes, “My life has not turned out in any way as I had thought. There have been many difficult, challenging times.” But she goes on to say all the wonderful things God has brought about on this unexpected path.

And I would say, my life has not turned out the way I thought it would either. I never expected to have breast cancer. I’ll never forget the day I had the mammogram, which would later show a problem. I have a distinct memory of leaving the hospital taking in the beauty of an early spring day. It never occurred to me I might have cancer.

Jeremiah 29:11 says, “For I know the plans I have for you…plans to prosper you and not to harm you, plans to give you hope and a future.” Like Elizabeth, I've found that God has worked so many wonderful things in my life and others lives on the unexpected path. Through what I went through with cancer, I've found that God doesn’t waste our suffering. I’m thankful I can trust Him with my future.

A future which I hope holds reading many more books by Elizabeth.

I've had the opportunity to meet Elizabeth on one of her infrequent trips back to the U.S., and she was so gracious and encouraging to me in my own writing endeavors. Please read more about Elizabeth Musser at her website www.elizabethmusser.com and if you haven’t read one of her books, please do. You’ll love it. Guaranteed.
Posted by Beverly Varnado at 7:34 PM

Thinking of you this month and celebrating with you! I love your analogy in the blog. And I agree with you that Elizabeth Musser is one of my favorite authors! Incredible.