Do not forget to entertain strangers, for by so doing some people have entertained angels without knowing it. Hebrews 13:2

Authors Neta and Dave Jackson have written many books, among them biographies for children, which were some of the highlights of our homeschooling years. A few of our very favorites were The Thieves of Tyburn Square, the story of Elizabeth Fry, The Bandit of Ashley Downs—about one of my favorite historical figures George Mueller, and a William Tyndale biography, The Queen’s Smuggler. The Jackson’s do a fabulous job bringing historical characters and times to life. These books written for grades three through seven were read much at our house throughout the elementary and middle school years.

My husband, Jerry, and I were late for the Gideon conference in 2009. When we rushed into the general session, we spotted a few seats on the back row.

“Are these taken?” I whispered to a man beside the seats.

A few moments later, the woman I assumed to be his wife came in and filled the seat.

When the session was over, Jerry and I got up to leave, but as I was reaching for my purse, someone tapped me on the shoulder. 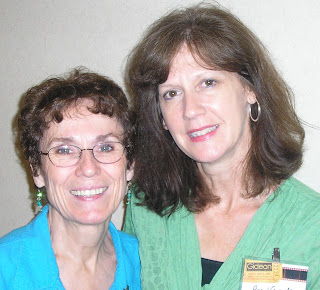 “Hi,” the woman next to me said, “I always like to meet new people. I’m Neta Jackson.”

“Neta Jackson,” I squealed. I thought of the stack of books back in my suitcase I brought to be signed by authors Neta and Dave Jackson, because I’d read they’d be at the conference. “I can’t believe I’ve been sitting by you and didn’t even know it.”

It seemed I’d been entertaining authors unaware instead of angels—or rather not entertaining. If Neta hadn’t spoken to me, I might have missed a premier opportunity to get to know her. I was being my usual “keep to myself” writer kind of way. I am not a sanguine personality, so it takes a real effort on my part to reach out to those around me. But oh, what blessings are in store when I do.

So, lesson learned—be mindful of those around you. It might be a divine appointment in which someone will bless you as Neta did me, or more importantly, you might be a blessing to someone else.

Who’s sitting beside you right now?
Posted by Beverly Varnado at 8:39 AM