All in the Same Bottle 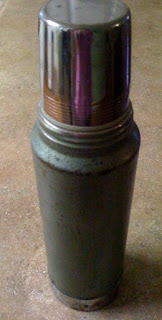 My husband is crazy about the folksy humor of a comedian named Carl Hurley. Hurley tells a story about a friend of his from back home in the hills of Kentucky who was all excited about owning his first thermos bottle. His friend was amazed that somehow it kept hot things hot and cold things cold.


When Hurley asked his friend what he was keeping in his new container, the response was, “Chili and iced tea.”

And that my friends, is the story of my life. Chili and iced tea--all in the same bottle.

We were thrilled to learn this morning that my husband’s test results appeared to show nothing significant in the way of cancer migration. But, after an extensive conversation with the doctor, the situation appears more complex than we first understood and makes a less invasive treatment unlikely.

This is very disappointing to my husband. And to me.

So, we’re right back where we started trying to choose the best of an unappealing range of options. We’d appreciate your prayers for wisdom in that regard.

On the iced tea side, my daughter received a phone call yesterday from the president of an institution of higher learning informing her that she had won their most prestigious scholarship award—four years of full tuition, a stipend for study abroad, and inclusion in an honors program. We were turning cartwheels in the driveway. Okay, we didn’t turn cartwheels in the driveway, but we thought about it.

Chili and iced tea--sorrow and joy--right up against each other.

It’s the story of all who live, but for those of us who walk with God, the secret lies in keeping our eyes fixed on Jesus. The disciples, after witnessing the glorious transfiguration, and hearing the voice of God, fell on their faces. When they looked up, they “…saw no one except Jesus.” (Matthew 17:8) From there they descended as Oswald Chambers says, “…into the demon possessed valley…” God took them from great joy to the harsh reality of life by causing them to focus on the only One who could sustain them through both.

So that’s where we are.

Looking to Jesus…no matter what’s in our thermos.
Posted by Beverly Varnado at 5:04 PM

The Ringing Bell reminded me of the old joke about the thermos which ask the question, "how do it know"........ God, all knowing, always knows the content of our life, the good, the bad, the ugly, the parts that need tending to and those that need love, grace and mercy. I welcome any opportunity to praise Him for creating, knowing and loving us. I always look forward to hearing the sound as the bell rings and I joyfully lift up the bell ringer and her family. I just wonder; does that mean ya'll are a bunch of dingalings?
Carol

Carol, Worse has been said about the bell ringer and her family. I guess if the shoe fits... Thanks again for your encouraging, uplifting words. Yes, I am so thankful God knows what's in my thermos. Taught a screenwriting class today to a group of writers in the Atlanta area, and we laughed again about chili and iced tea.