Ringing Bell Headquarters—Last evening between the hours of 8 p.m. and 10 p.m., Belle Varnado, delivered gray triplets and one tuxedo. The delivery occurred without incident, and mother and babies are reported in excellent health. 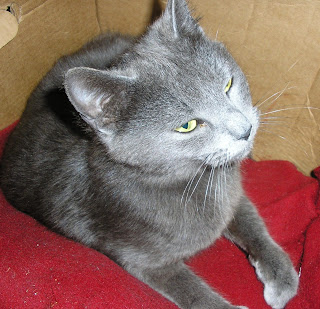 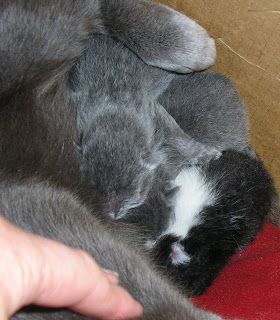 A humble cardboard box with red blanket was the mother’s eventual birthplace choice. “I wanted the kittens to stay in touch with their roots,” Belle explained. 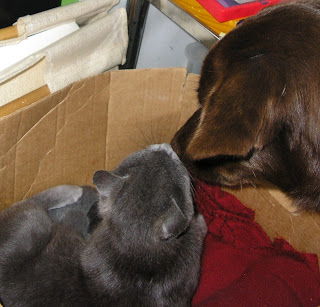 Lucy Varnado, an aunt, commented on the kitten’s arrival, “We’ve all been anxiously awaiting the birth of these tots. They bear a striking resemblance to their mother, and I can’t wait to give each one a welcome lick from their Aunt Lucy.”

Other family members, when queried about the kittens, were not as enthusiastic as Lucy was. The tabby, Misty, for example issued a terse, “No comment.”

Feline Isabelle, when informed of the births, simply fled upstairs and hid under a bed. When questioned later, she related her last encounter with Belle—a rough tumble and roll. Still nursing the wounds where she lost several fur plugs, Isabelle pontificated what more kittens with their street cat mother’s disposition might do to her coiffure. “I heard she has a tattoo,” Isabelle said while licking her magnificent fluffy tail. “And four more like her? What will happen to the neighborhood?”

Upon hearing the news, the senior member of the furry household, toy poodle Charles Varnado, Esq., simply dropped his head in a despondent manner and murmured under his breath, “Cats rule. Cats rule.”

The front yard squirrels initially called for an all day nut party. One rodent offered this comment, “That Belle’s a terror. It’s good to know she’ll be out of our fur for a few days. How many kittens did you say she had?” Upon learning there were indeed four kittens, and after consultation with companions, the entire squirrel brigade was seen evacuating the treetops with knap sacks over their shoulders, apparently headed for less dangerous territory.

Though the response to the births has been mixed, the mood is still upbeat at Ringing Bell Headquarters. Stay tuned for more on this story later in the week.

All things bright and beautiful,

All creatures, great and small,

All things wise and wonderful,

The Lord God made them all.
Cecil Francis Alexander

God saw all that he had made, and it was very good. Genesis 1:31a
Posted by Beverly Varnado at 5:24 PM

What a cute story! Can't wait to hear more. Sounds like a possible children's book.

Hadn't thought of that, Patricia. We'll see what the Lord does! Thanks for reading.

ooh it would be a cute childrens book! this was funny mom.

Glad you think so, Bethany! Maybe you could do the illustrations?