Lucy, Little Kitty, and a Name

I’ve been writing a lot in hospital and treatment center waiting rooms lately, and the scenery is growing drab. I thought it might be time for a glimpse into the story annals of what my reader Carol calls the “ringing bell creatures.”

Soon after I was able to get my hands on the newly appeared feral Little Kitty in the back yard, I tried to stuff her into a carrier to get her spayed. She almost killed me expressing her objection to this action. After which, she snubbed me for quite a while. By the time I was able to catch her again, it was too late.

There you have it.

I don’t know what it is about Little Kitty’s (still doesn’t have a name) maternal state that has increased her Lucy dependency. They’ve always been unusually friendly towards each other for dogs and cats. We think when the cat first showed up, Lucy shared her food with her. They'd already become friends when we saw them playing one day. We think they're about the same age, and recently they’re inseparable.

I looked out on the patio the other morning and here’s what I saw. 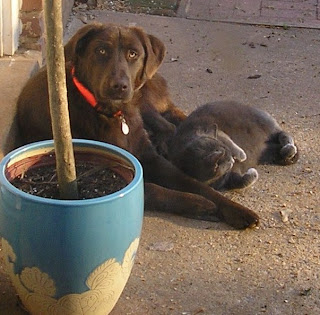 Then Lucy started grooming her which she does quite often. Lucy's saliva on the cat's head makes the fur spikey like she's dipping into the styling gel. 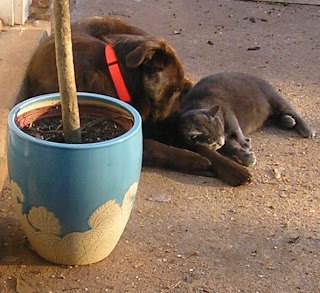 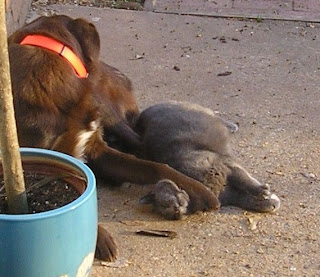 It appears Lucy is about to go for her jugular, but not so. Little Kitty just relaxed under the weight of that giant foot, and then when she grew tired of Lucy’s brown mitt on her neck, she took her paw and pushed it off.

I half expect that when the kittens come, Lucy is going to be involved in their rearing—something like a doting aunt. I imagine the Australian shepherd in her will equip her for crowd control, so she’ll have her own little pen of kittens to herd.

More on that later.

Meanwhile, we’re getting the maternity ward ready. I’ve put out three different beds in my daughter’s art studio. The feline has slept in two of them already, so I don’t know which one will wind up being the birthing room. We’re already working on good homes for the kittens. Found one already.

I hate for Little Kitty to give birth without even having a real name. We didn’t give her one initially, because we didn’t know if she’d stay. But she’s ours now. Definitely ours.

Here in this treatment center waiting room as I report to you from the fire, I just want to say how wonderful it is that God calls us by name and that we are his. It is a comfort beyond measure.

So, without delay, Little Kitty is getting a name.

I’m thinking Belle might be nice.
Posted by Beverly Varnado at 12:55 PM

oH, another animal lover. I knew I loved you went I met you!~ Precious story. Thanks for sharing yur gift of writing. love, Oby