Meet the Kittens: a One Ringing Bell news update

Ringing Bell Headquarters- Today, Belle Varnado celebrates one blissful week with her new family and wishes to thank all who’ve sent their congratulations. She’s very proud of her offspring and wants to introduce them to the rest of the world.

Wilbur, the tuxedo, was named after a certain pig in one of E.B. White’s books. It’s rumored that this past week, a spider in the studio home of the kittens wrote “some pig” on her web about our Wilbur. But not in a good way. Wilbur is some pig—all elbows at the milk fountain and definitely at a loss for table manners. Belle has her work cut out with this one.


Sara, a lovely little lass, put us in mind of Sara Crews in Frances Hodgson Burnett’s Little Princess. Though she was born in a cardboard box, Sara has princess in her heart. Delicate, but of noble character, she never shoves, but waits her turn at feeding time. We expect great things from Sara.


Carl, named for Alexandra Day’s famous Rottweiler. He may be the runt of this litter, but he’s a big cat inside, and we can see Carl carrying on some of the antics of the canine for whom he was named. With a mischievous bent, he’s likely to push Belle’s parental boundaries.


Finally, Eloise. She’s gooey fun and silly games, but smart as can be. And she has a good heart. She means well, but sometimes gets into trouble. With a penchant for travel and excitement, we can definitely see her living at the Plaza like Kay Thompson’s Eloise.

“I’ve never seen a better mother,” Lucy said. “She's hardly left those kittens for days. I’ve really missed her here in the back yard, but family comes first.” Lucy went off to console herself by excavating another flowerbed.

The other animals, Isabelle, Misty, and Charlie, are persisting in their lukewarm reception to the new additions.

“There’s five of them, and only three of us,” Misty said. “But we’re not letting them take over around here,” she said as she nervously switched her tabby tail.

Apparently, there’s been a lack of solidarity to the situation as Isabelle was back under the bed, and Charles decided to take a sabbatical to parts north. He left no forwarding address, but Charles who is know for his brevity, left a message spelled out in dog food bits: two simple words “D-O-G--G-O-N-E.”

Well, that’s it for this report from Ringing Bell Headquarters. Stay tuned for another update on what promises to be an exciting week as the kittens open their eyes. 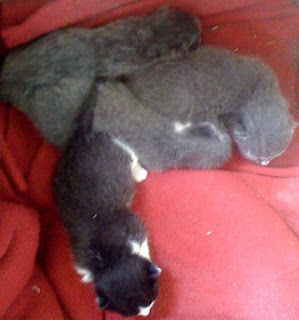 Oh, and we forgot to mention, the upstairs and downstairs fish have applied for an immediate transfer.

How many are your works, O Lord! In wisdom you made them all; the earth is full of your creatures. Psalm 104:24

Especially at the Varnado home.
Posted by Beverly Varnado at 10:21 AM