Week Three with the Kittens, A Ringing Bell News Update

RINGING BELL HEADQUARTERS—Staff reports are glowing here as the kittens turned a big three weeks old today. The video cameras have been whirring at Headquarters, and we hope in the near future we'll be able to share the first video footage of the triplets and tuxedo you’ve come to know and love.

As the kittens have gotten older, and bigger, Belle has ramped up her vitamin intake, but still she grows a little weary from time to time. 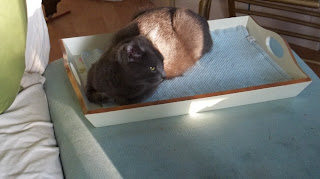 "I finally got those kittens to sleep,” an exhausted Belle said earlier in the week as she curled up on the tea tray for a nap. “I’ve enjoyed every minute of being a mother, but now they’re getting a little rambunctious. I need a break. Must be the terrible threes (three weeks that is). Wilbur’s been trying to crawl out of the box all morning and the little fellow is only nineteen days old. Plus, Eloise and Carl are always fighting over milk faucets. “ 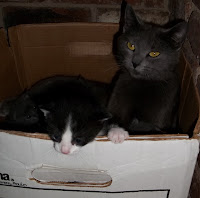 Staff found themselves unprepared for Wilbur’s climbing escapade. The Ringing Bell Kitten Development Chart indicated climbing would not occur until after the third week. Obviously, Wilbur is advanced for his age. This event sent staff members scurrying to find padding to surround the kitten’s domicile in the event one of the tots topples over the edge. 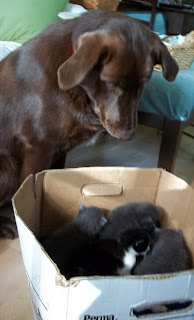 Lucy babysat for a while one morning this week so Belle could take a stroll outside. “I can’t wait to get the little fellows out of this box and teach them a few herding maneuvers,” Lucy said then tumbled Wilbur, Carl, Eloise, and Sara over with her snout. “Why, we’re going to have a great time.”


In other news, the tabby Misty spotted a staff member packing for a woodland excursion and decided she’d accompany him, so she perched watchfully on a camo bag. When told she would not be making the trip, she fumed. 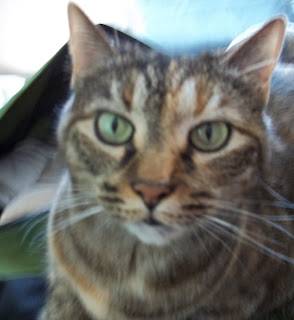 “Why not,” she said. “I’ve been stuck upstairs for almost two weeks, because of that Belle hogging the first floor.” When it was explained that this particular excursion would involve encounters with cat-eating alligators, the tabby became outraged. “Do you think there’s really any difference between an alligator attack and an assault by that wild-eyed, razor-clawed, crazy, tiger-mom Belle?” she asked. The staff member did have to admit that Belle could be ferocious, but held on to his prior decision that Misty couldn’t go. In protest, Misty barfed a fur ball into his duffel.

Isabelle has now changed her permanent mailing address to an upstairs bedroom. “I’m not going downstairs again until the entire place has been fumigated. She’s lived outside, you know. There’s no way of knowing what disgusting things she may have drug in. Meanwhile, I’m just trying to relax under all this pressure. I have a terribly challenging decision as my pedicurist is dropping by later and I can’t decide whether to do my nails in catnip coral or tuna fish tangerine.” 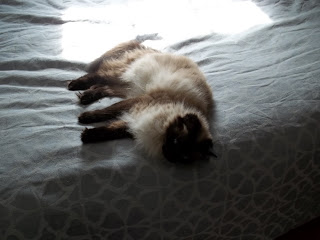 A mysterious event occurred last evening, which disturbed several residents. A loud yowl was heard in the side yard when Belle was out for her evening constitutional. Belle was tight lipped when she returned, and for a time, no one stepped forward to explain its origins. But eventually a person of interest was brought in who goes by the moniker,”Front Yard Grey.” During the interview, the staff discerned an uncanny physical resemblance to the triplets. “Do you have any children, sir?” they asked.

Front Yard Grey twirled a whisker. “Uh, do I need a lawyer?”

Lucy walked up about that time. “I didn’t want to say anything, but Belle told me all the father does is lie around under the house, too lazy to even catch a mouse. She spoke with him about it last evening. Of course, I told her not to worry, as long as Aunt Lucy has a home, those little fluffy offspring of hers would always have plenty of love and a roof over their heads .”

This reporter is much affected by the strong ties between Belle and Lucy.

Oh, we almost forgot, that world traveling octogenarian poodle, Charles Varnado, Esq., sent us a postcard from his new location at the beach. Inscribed on it was one question. “Got kittens?”

As we conclude this report, Belle meows unceasingly as she runs back and forth to the open door, apparently trying to call the kittens to follow her outside. It’s sure to be another eventful week at Headquarters.

And God said to Job, "Do you watch when the doe bears her fawn? Do you count the months till they bear? Do you know the time they give birth? They crouch down and bring forth their young; their labor pains are ended. Their young thrive and grow storng..." (Job 39:1-4)
Posted by Beverly Varnado at 12:27 PM