Week Two with the Kittens: a Ringing Bell news update 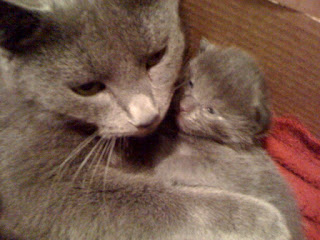 RINGING BELL HEADQUARTERS—Due to a strong storm approaching earlier this week, Belle Varnado and her four young ones were moved inside Ringing Bell Headquarters. Formerly feral Belle took about five seconds to adjust to her new environment.


“This is nice,” she said surveying the kitchen corner that staff had selected for her. “Maybe not as interesting as a storm sewer, but nice,” Belle observed.

Security was tight inside headquarters, and a perimeter was established to ward off civil unrest, as the other felines were very vocal about Belle’s relocation into their territory. The next day, feline Misty breached security and confronted Belle.

The staff reports they are still sweeping up grey tabby fur.

“She about tore my head off,” Misty said when interviewed. She licked a bare spot on her left flank, “I just wanted to tell her this has been my space for ten years, and she better not get used to it, because she’s not staying. I didn’t get a word out, before she jumped me.” Misty crept off toward the upstairs window ledge where she’d been staking out a couple of cardinals. She paused and looked back, “Oh, you can let that Belle know not to count on me for any babysitting.”

The ragdoll, Isabelle, has reportedly been in purr therapy for a week. “I don’t know what happened,” she said. “The last time Belle pounced me, my purr apparatus just quit working.” Isabelle gave her chocolate mitted paw a long lick. “Why that’s never happened before. My therapist says I’m in shock.” She fell back against the silk bed cushion where she’d been lying. “This is all, just too, too much.” 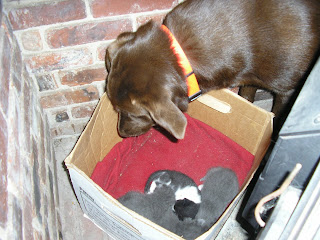 Lucy Varnado welcomed the brood warmly into the indoor space she occupies at Ringing Bell Headquarters. “Why, I’m just as happy as can be to get the youngsters in here with me at night. You know, Belle’s such a worrier. She confided to me that she was concerned about some people she knew in the neighborhood. In here, it’s just family.”

Based on this information, a decision was recently made by staff to continue Belle’s residency inside Ringing Bell Headquarters. It’s reported a certain grey striped traveling salesman has been lurking about, wearing a gold chain, and reeking of Aramis. A character of questionable intentions and appearing to have a perpetual dirty nose, staff agreed with Lucy and felt it best to protect Belle and her kittens from any unsavory influences.

The elderly poodle, Charles Varnado, returned briefly from his northern excursion, but after finding Belle had transferred inside Headquarters, he called a friend of his in a retirement center and asked if he could crash for a few nights.

Just when we were about to wrap up the report for week two, Belle decided the kitchen was too busy and moved her crowd behind the wood burning stove. Good thing the stove’s not in use with spring’s arrival.

With all kittens open eyed, week three promises to be lively. Stay tuned.

Praise the Lord from the earth, you great sea creatures and all ocean depths, lightning and hail, snow and clouds, stormy winds that do his bidding...wild animals and all cattle, small creatures and flying birds, kings of the earth and all nations...Let them praise the name of the Lord, for his name alone is exalted; his splendor is above the earth and the heavens.(Psalm 148:7-13)
Posted by Beverly Varnado at 10:37 AM