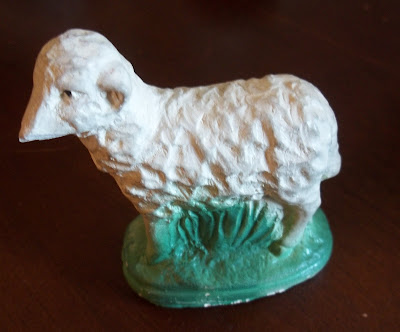 
This little Italian figurine was originally  part of an old crèche set. Long seperated from its counterparts, it was given to me some time ago by a precious friend. Intended to be used at Christmas, I leave it out all year because as God’s lamb, it makes me think of my Good Shepherd.

The first year we home schooled, we read Mountain Born by Elizabeth Yates, which became one of my all time favorites. In home school, the world seemed to open up not only for my children, but for me as well. I can only pray my children have learned even half as much as I have. Mountain Born was but one example of many books through which God spoke.

A Newbery honor book for 1944, Mountain Born is the story of Peter, a young boy who grows up on a mountain sheep farm learning to be a shepherd. Benji, a wise old shepherd and Peter’s best friend, teaches him.

Elizabeth Yates was raised on a farm and knows her subject well. This book evoked the response from my kids that became all too common when reading a sweet book like this one.

In the story, when the sheep had been attacked by wolves, “Benji moved in among the flock, talking to them, reaching out his hands on either side to comfort and allay. Benji’s slow tones spread assurance to the flock and gradually they became calm.”

I thought of Jesus as He comes to us extending His hand in comfort.

Peter had a coat made for himself from the wool of His cosset, then after her death, her lamb became lost on the mountain. Yet, when she caught the scent of her mother’s wool in Peter’s coat, she found her way back to him and home.

The only thing I know about raising sheep is what I’ve learned from people like Elizabeth Yates. But, the more I learn, the more I realize the weight of the scriptural symbolism of sheep.