After we left the Gateway Arch, we tried to cover too much ground. Usually we can’t drive the three minutes from our house to the YMCA without our kids getting into some sort of tussle. But, we’d tried to prepare them for a very long trip, and they’d managed their behavior pretty well. Only, we’d pushed them too far. Their little backsides had taken all they could take today, and they were growing more and more like caged animals. We finally landed in Colombia, Missouri much later than we hoped.

“We want to go swimming,” they cried in unison when they saw the hotel swimming pool. Jerry and I looked at our watches and then at each other. It was 10:00, but it would probably be an easier bedtime all around if these kids got their energy out. So we hit the pool and wound up with a late bedtime.

Bleary eyed, I wandered down to the hotel’s continental breakfast the next morning. As I sipped coffee, I watched several families parade through the hotel lobby to continue their own travels. Every child held a stuffed animal. My kids showed up in the lobby with their own furry companions, Bethany had Daisy, a giant (and I do mean giant) stuffed Labrador and Aaron had Rocky, a black Rottweiler.

I kind of resented these stuffed dogs. They made me think of a man back home who’d had his pink plastic flamingo stolen from his yard. He began to receive letters from around the country, which included pictures of the flamingo by the Grand Canyon, the flamingo in the Redwood Forest, the flamingo at the Pacific Ocean, etc. You get the picture. The man said he wasn’t mad about his flamingo being stolen; he just didn’t like it the flamingo had been more places than he had. Ditto for me. Stuffed dogs traveled more places in one summer than I’d seen in forty years. Oh, well.

In Kansas City, we made a right turn toward all things north: North Dakota, the North Pole, and the North Star. None of those was on our itinerary that day, or any day. It was just interesting to think about where we’d wind up if we kept passing mile markers.

Aaron and Bethany bored through library books, wild life cards, and Legos. My only hope was the stash would outlast the trip. The scenery north of Kansas City held no interest for them, but Jerry and I –we were mesmerized. 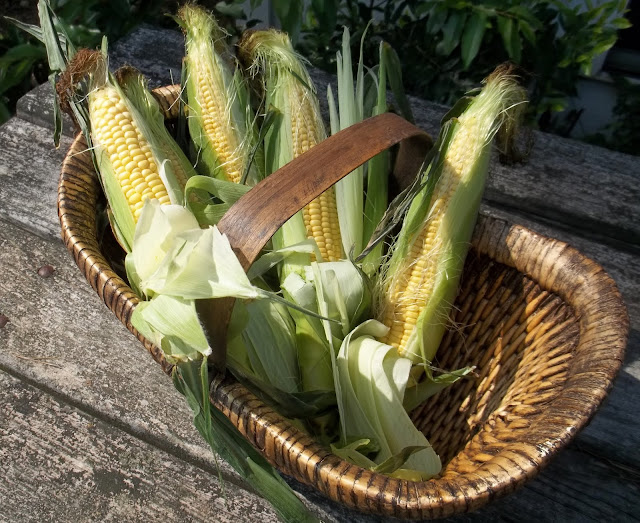 I eyed the tassels that seemed to go on forever. “Bread Basket,” I echoed as we drove and watched corn.

“Who’d know our entertainment threshold could be this low?” he said.

“Captivated by corn,” I answered.

A farm in North Georgia might be forty hilly acres. Why, that’d be one small patch of the green quilt boasting thousands of acres of corn and other crops in the Missouri River basin. In the Midwest, the table is set for the entire world to come and dine. Farms are like the sea, stretching to the horizon and at the horizon stand the bluffs of the Missouri. It felt at times we were sitting in a trough—a trough of corn. 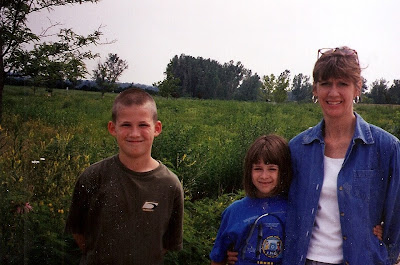 We wandered into Council Bluffs, Iowa where we’d planned to visit the Western Historic Trails Center. The center featured topographical maps of the Lewis and Clark, California and Oregon Trails. I loved they’d left the prairie around the museum in a natural state then sown it with native wildflowers. The butterflies swarmed almost magically. The museum backed up to the Missouri River at a site where it’s thought Lewis and Clark made a stop. Just a short hike to the location, my brochure said. We were up for it.

“Me, too,” Aaron said for once agreeing with his sister.

“I thought you could get your energy out on the hike,” I said checking a sign to see how far we still had to go.

“My legs are prickly,” Bethany continued.

We never made it to the Missouri. We turned back to the museum, and scanned the exhibits a little too quickly for my taste, but our expiration dates were approaching at lightning speed. When I filled out the field trip form later, I asked what the kids' favorite things were.

"The light up map,” Aaron said.

“And put down there we didn’t like that walk to the river,” Aaron said.

Yeah, I got that part.

I did leave the center with one astounding revelation—the quick and steep rise in elevation from where we were standing then to the top of the Rockies. I still marvel at how the ancient Appalachian mountains of my childhood are mere steppingstones compared to the relatively new Rockies.

Council Bluffs is so named because of the meeting Lewis and Clark had with the Oto and Missouri people there. Clark wrote their mission was, “to let them know of the change of government, the wishes of our government to cultivate friendship with them, the objects of our journey and to present them with a flag and some small presents.” It was a friendly meeting.

Also, in Council Bluffs they saw their first badger. In order to share their unusual discovery with President Jefferson, the badger met its demise. It was stuffed, and sent along to the White House with other first time encounters on the exhibition.

We were about to have a first time encounter ourselves.

Most hotels in this part of the country only had indoor pools to accommodate the more inclement winter weather they had most of the year. This particular hotel pool smelled strongly of chlorine and the heating system seemed to be working overtime. Granted, it wasn’t the Ritz, but we thought it’d be fine.

I blinked my chlorine sensitive watering eyes and looked down at my favorite swimsuit, blue with yellow flowers. I’d bought it the summer before when I had cancer. Its color and beauty had cheered me then. Now, the flowers seemed to be losing some of their vigor.

“Do you think this hot chlorinated water is bleaching our suits?” I asked Jerry.

We discovered when we returned to our room the answer was a resounding yes. All of us were a bleached out, red-eyed sight in the fluorescent bathroom light. Aaron’s red suit was now pink, Jerry’s black a light grey, and Bethany’s plaid had dimmed significantly. I feared if Lewis and Clark had encountered us, they might have thought us anomalies too, and had us stuffed and sent to President Jefferson.

“Ruined,” I said running my hands over the wilted flowers.

“But, it was worth it,” Jerry replied smiling.

I followed his eyes to the kids climbing into bed. They dropped off to sleep in record time.

I made a note in my journal that night of a quote I read earlier in the day from C.S. Lewis’ mentor, George McDonald. “He is not a God that hides himself, but a God who made all that He might reveal himself.”

As I reflected back on the day, I realized that even in the vastness and beauty of corn, God had indeed revealed himself.

From the American King James Version, "The pastures are clothed with flocks, the valleys also are covered over with corn, they shout for joy, they also sing" (Psalm 65:13).

Lewis and Clark for Kids by Janis Herbert was used as a source for this post.
Posted by Beverly Varnado at 11:23 AM