From the Water's Edge A few days ago, Jerry and I had the opportunity to worship with other believers on the beach. As the group sang praises to God, I was aware of how the music drifted out in all directions.

A few coast visitors passing by stopped and joined us. But as Pastors Brett and Hollie prayed and brought a meaningful devotion from John 21, I have to admit, I was a little distracted. Right in front of me, several little fellows ages three and up were busy building something.


I couldn’t figure out what, though. 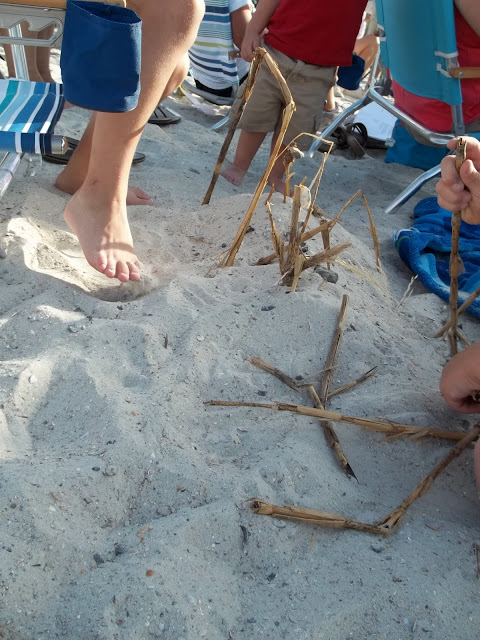 They gathered sticks from the shore and thoughtfully arranged them by plunging them deep into the sand. When they depleted their driftwood supply, one of them would run back to the water’s edge and fetch back more of the broken reeds. The formation became quite large in its breadth nearly touching the feet and rears of those sitting around. Still, I didn’t know what they were doing.

After the service concluded, I couldn’t stand it. I had to ask.

“You've worked so hard, and I love your creation here, but what are you making?” I asked one of the construction foremen.

He peered at me as if the answer was the most obvious thing in the world and said with great sincerity, “We’re building a family.”

As I surveyed the group gathered by the ocean, I knew he was right. We were building a family. For the church we were with had drawn several members into their fold through these beach outreaches over the past year. Just as the tribe of stick figures harvested from the waters’ border ever increased, so had the number of believers gathered from the fringes of the sea.

Words read from John 21 just moments earlier came to mind. Jesus had asked the disciples if they’d caught any fish. They hadn’t and he instructed them to, “Throw your net on the right side of the boat and you will find some.’ When they did, they were unable to haul the net in because of the large number of fish’” (John 21:6). 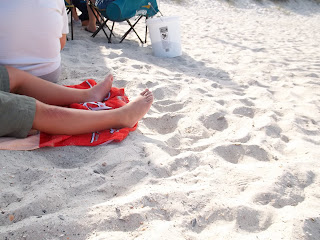 With bare feet and windblown hair, this precious group of believers was casting their nets and building a family.

I promised one of the little guys, I’d send him a picture of his work. So here it is, for him and the entire world to see.

I wonder if we all might ask ourselves how we, too, might help build God’s family.
Posted by Beverly Varnado at 5:40 PM