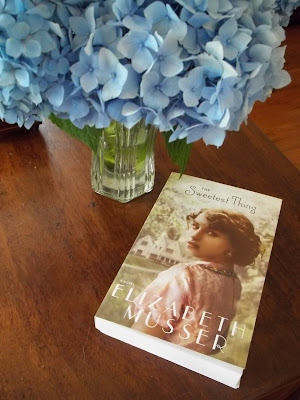 Former Atlantan Elizabeth Musser, one of my favorite authors, is back in the States from France for two weeks to launch her new novel The Sweetest Thing. Elizabeth and her husband who have been missionaries in France for many years are currently on assignment overseeing missionaries throughout Europe.

I first met Elizabeth a couple of years ago in Minneapolis at the American Christian Fiction Writers Conference and once more had the privilege of hearing her speak last night at The Atlanta History Center.

Though I’ve just purchased her newest novel, I understand it’s a friendship story set in the Great Depression of two girls who are opposite in almost every way. From the back cover copy, “With her endearing characters and poignant storytelling, Atlanta native Elizabeth Musser vividly re-creates the charm of her beloved city amid the poverty and plenty that shaped the 1930s.” Elizabeth incorporates some of her personal family history by using her just discovered grandmother’s journals from the 1930’s to help tell the story. 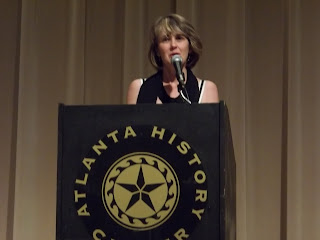 Event attendees were just beginning to trickle in last night when I arrived in order to purchase a book. Always gracious, Elizabeth answered several writing questions I had. I was glad for the few moments alone with her early on, because later after her speech before a full house, the book signing line wended long.

I’m always impressed by Elizabeth’s ability to walk between two worlds. God uses her to encourage those who are ministering to prostitutes and refugees in cities throughout Europe and also to speak eloquently before an audience in the elite Buckhead area of Atlanta. Always faithful to spread the word, she concluded with a question last night drawn from her story of “poverty and plenty.”

“What fills you up?” she asked.

Then she read a few verses from Matthew 6:24-35, which includes, “But seek first his kingdom and his righteousness, and all these things will be given to you as well.”

Can’t wait to read The Sweetest Thing.
Posted by Beverly Varnado at 3:46 PM

Bev, I don't know Elizabeth's work, but I've been reading her novel, The Swan House, this summer.It is great to understand some of her personal story. Thanks for sharing! Phyllis

She's coming to Thomasville this Saturday! I'm so excited to meet her.

Bunny and Phyllis, I've had an unbelievably hard time commenting on my OWN blog. I hope the problem is fixed now. Phyllis, I hope you love Swan House as much as I do. Bunny, so thrilled for you especially since you're writing fiction now.