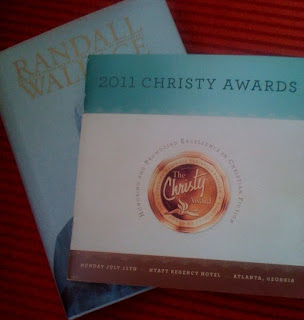 Last evening, I had the honor of attending the 2011 Christy Awards held in Atlanta this year. The Christy, taken from the name of Catherine Marshall’s novel, is given for excellence in Christian fiction.
Jerry and I managed to maneuver through rush hour traffic to make it to the Regency Hyatt downtown on time ( a rare occurence for us), and from the moment we entered the area where attendees congregated, it seemed a time of wonder.

It was good to be with many folks I’ve known for years including my friend, Rusty Whitener and his wife Rebecca. Rusty, a finalist in the First Novel category, also made the finalists for Contemporary Fiction for his novel, A Season of Miracles. We spoke with Cindy Sproles of Christian Devotions.U.S., Vonda Skelton, Elizabeth Musser, Ane Mulligan, and Gina Holmes, a finalist in First Novel. We later shared a laugh with Robert and Kathy Whitlow. 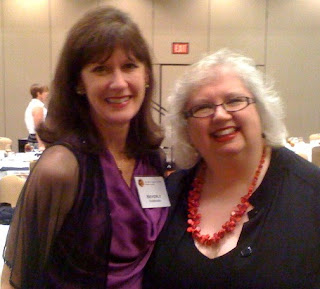 We eventually took our seats for the banquet, and I found myself beside Susan Osborne, long time industry professional, who knows absolutely everyone. How I enjoyed her effervescent personality.
Another special treat--Liz Curtis Higgs, the Master of Ceremonies for the evening, kept us laughing with her quick wit (shown right).

As I’ve mentioned before on One Ringing Bell, the author Debbie Macomber suggests making a list of people you’d like to meet. The keynote speaker at the Christy’s heads the top of my “want to meet” list: Randall Wallace. According to the back cover of his book The Touch, which he so generously gave away to attendees last evening, Wallace “is an author, screenwriter, director, producer, and songwriter. He directed the movie Secretariat. His other films include Braveheart, Pearl Harbor, and We were Soldiers.” 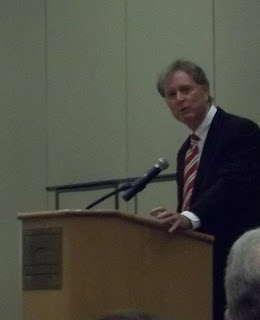 Jerry and I watched Secretariat several times when Jerry faced cancer., and it profoundly affected us. So, I was glad Jerry could be with me.
Wallace’s message both challenged and encouraged those attending, but two things stand out in my mind. “It’s more powerful to believe than to know,” he said, and then shared that he is well versed in Christian dogma, but what's more powerful is to believe God’s message. It’s the difference between knowing the facts and believing the truth.

He also said, “Stories give us our identity.” Many of us can point to a book or movie, which we latched onto as sort of a banner. Jesus used story to communicate his powerful message. For all of us in the audience who feel called to tell stories, this was a huge encouragement but also served to raise the bar, to make us think about the identity we might be giving away through our stories. 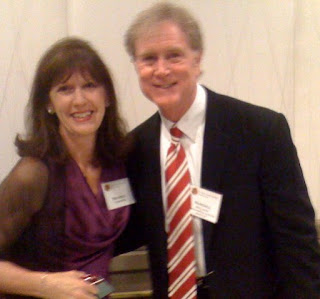 As Brandilyn Collins prayed a concluding prayer, it was also a night of remembering that it’s all about Jesus. It’s all about what he’s called us to do.
What a night of joy! My face hurt from smiling so much when I went to bed last night. Many congratulations to the winners, which you may read here. But, really, after a night like last night, I think every person there felt like a winner.

"I press on toward the goal to win the prize for which God has called me heavenward in Christ Jesus" (Philippians 3:14).

Posted by Beverly Varnado at 4:54 PM