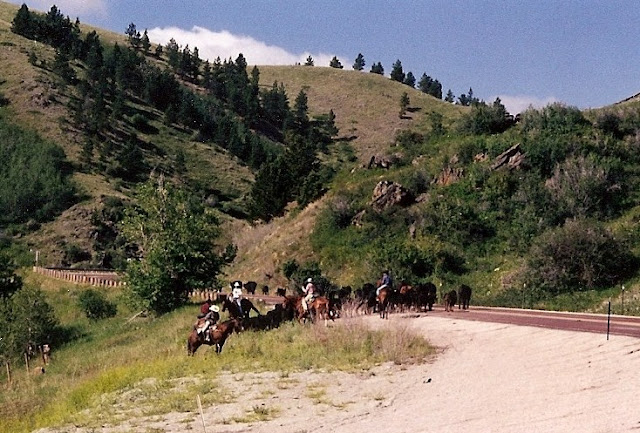 A horse sidled up beside me and the cowboy riding it tipped his hat in a way that said, “Howdy, Ma’am.” On our way over the Big Horn Mountains to Yellowstone, we’d been caught in a cattle drive. A first for me. I recently heard a woman share about her struggle to adjust to country life after a move from a metropolitan area. She said, “I’m mostly city and cement.”


Ditto.
Though it’d been some time since we’d had an historical encounter with Lewis and Clark, we found they indirectly named these mountains. They’d given the Bighorn River its moniker on their return from the Pacific. The mountains were named for the river that runs through them. There’s no hurrying a cattle drive, so we just inched along on our way to Yellowstone surrounded by cows the color of dark chocolate.
Once we passed the cattle drive, I couldn’t keep my eyes off the altimeter my dad had installed in the van we borrowed from him. Yes, altimeter. An Air Force veteran, he liked aeronautical gadgets. We’d begun at about 4,650 feet at Buffalo. At 8,000 feet, we stopped at Ten Sleep Creek and took some pictures. Then we crested the mountain.
I’ve never understood the meaning of the word “switchback” until we crossed the Bighorns. I do now. Switchbacks are the only way engineers can cut roads across some of these mountains.
The elevation is high.
The drop offs sheer.
Be still my heart. 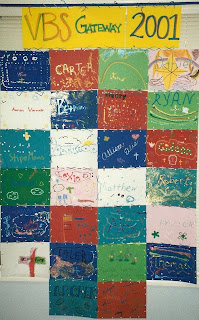 We weren’t quite up to speed on how to take these mountains, and we began to smell brakes. We needed to pull over and let them cool a bit, and the place we chose turned out to be a United Methodist Youth Camp in the town of Ten Sleep. As we waited, we went inside the chapel there and hanging on the wall was what would be one of my next Vacation Bible School projects. Composed of foam sheets made by individual children, they were woven together to make this wonderful wall hanging. I loved it and had such joy in remembering its origin later when I helped the children at our church create the same thing.
When we finally made it to Yellowstone, just inside the east gate, we saw a crowd of people stopped along the road forming what we later learned was a “bear jam.” We stopped to see what was happening. 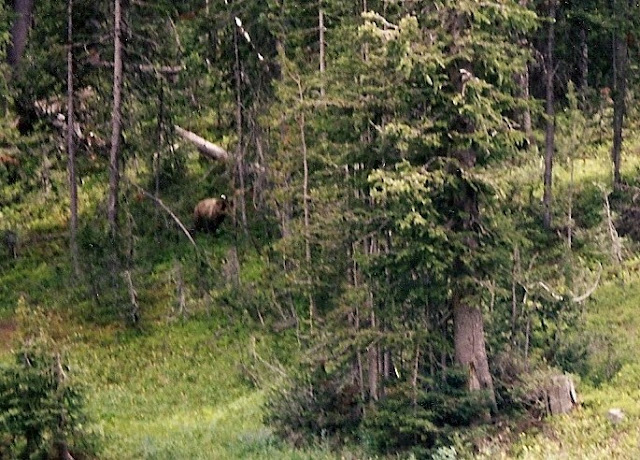 About fifty yards away, a grizzly ambled toward us (left middle ground in the above picture) . Astounding. People come to Yellowstone for years and never see a grizzly and here we were only minutes inside the park. We felt safe enough at first, but when he started moving in our direction, we headed for the car. In the next few miles, we’d see both bull elk and buffalo. 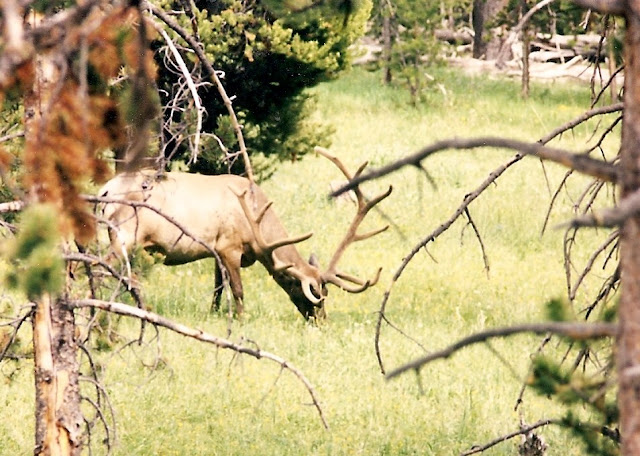 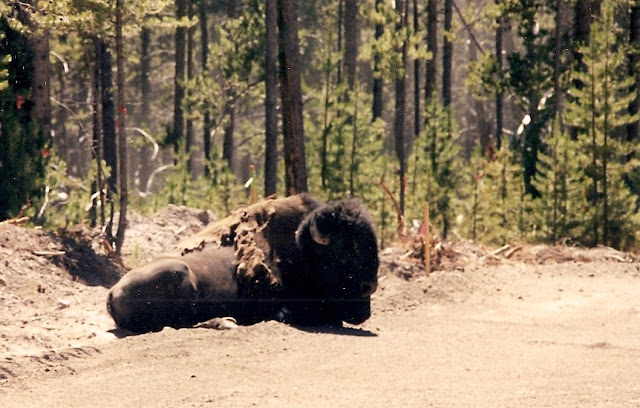 Both my children kept journals on this journey as part of a home school assignment. Aaron had made hardly any notations in his up until this point. But these wildlife sightings ignited his creative energy. He grabbed his journal and tried to record all he saw.
I recently came across this journal. 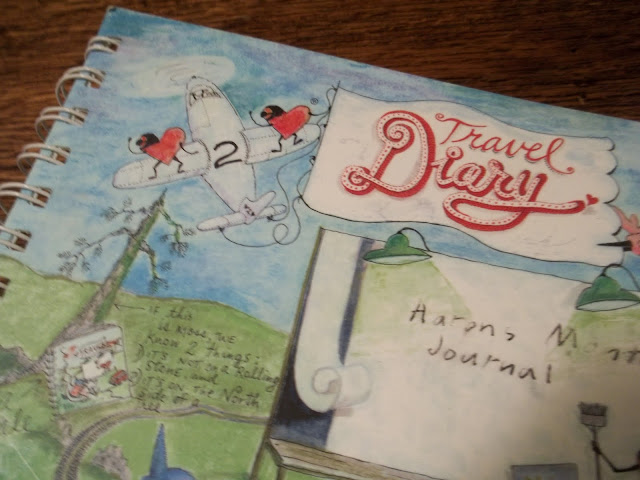 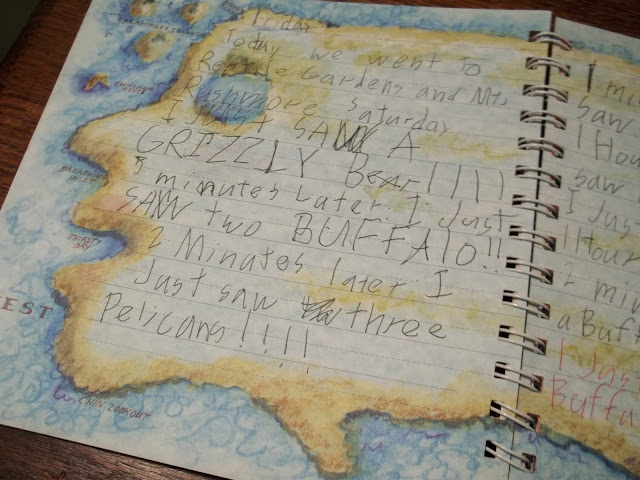 "I just saw a GRIZZLY bear!!!" he writes. "Two minutes later. I just saw two BUFFALO!"
As I held it in my hand and thought of his bedroom walls full of wildlife prints, I wondered how much those first few minutes in Yellowstone helped move him toward  his current goal of becoming a wildlife biologist.
I don’t know, but I do know I’ll never forget those precious days of discovery we had together as a family. And I believe God who cares about all the details of our lives sent those animals along that day just to make glad the heart of my little son.
“The Lord your God is with you, he is mighty to save. He will take great delight in you, he will quiet you with his love, he will rejoice over you with singing” (Zephaniah 3:17).
Posted by Beverly Varnado at 10:28 PM