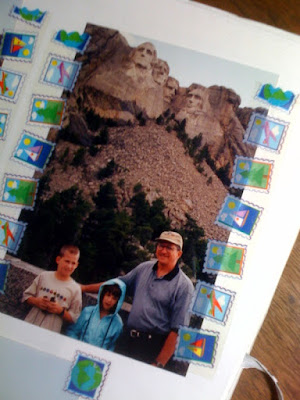 We're seeing Mt. Rushmore a little out of order  today, because of its relevance to the Fourth.
According to the parking pass in our scrapbook, we entered Mt. Rushmore at 1:21 p.m., way past lunchtime. So we headed for the cafeteria at the base of the monument. The dining room was divided into sections by state, each one designated with a flag. We found our spot under the red and blue Georgia colors, which gave me a twinge of homesickness as we sat down, but not for long. That’s about the time I looked up at the monument and had a very North by Northwest moment. I’ve never been sure if the movie was shot on location or just had a very convincing set. In any event, I could picture Grace Kelly and Cary Grant bursting in any time.

The faces of Washington, Jefferson, Lincoln, and Roosevelt were ever with us as we devoured our food. Jerry and I marveled at the engineering feat creator Gutzon Borglum had accomplished through his Mt. Rushmore sculpture. Borglum, who had studied under Rodin, and according to the official guide for Mount Rushmore, had also worked on the confederate memorial on Stone Mountain in Georgia. He "designed the flickering flame on the Statue of liberty’s torch," and as the brochure noted "created more art displayed in our Nations’ capital than any other artist.”

After we finished our food, we followed a path along the base of the monument to get a closer look. I felt I was living in a “Weekly Reader.” As a child, I never dreamed that my universe would expand to a point where I’d actually visit the places we studied. In contrast, my children have probably never dreamed they wouldn’t visit the places they study.

I was struck by how many other nationalities I saw visiting the monument. From all over the world they came to see this sculpture in the Black Hills of South Dakota called “America’s Shrine to Democracy.” Perhaps, some of the visitors I saw did not come from countries who subscribed to a democratic understanding of government. I thought of this long after we left the monument, and wished I could have spoken with them about their experience that day.

I wanted to bring in sleeping bags and sleep under the gaze of these stone men, but of course, the National Park Service would’ve never gone for it. So, we reluctantly said good-bye to our large Presidents and hoped to see them again soon.

President Ronald Reagan said of the Mt. Rushmore sculpture, “Even after the many years it will take to wear away these rock carvings, their ideals, the principles of democracy and freedom, will live on. For more than 200 years now, this great country of ours has enjoyed the freedoms these four giants fought for. So, let us cherish that freedom, and never lose sight of this Memorial and the men behind it.”

Today, as Reagan said, let us cherish freedom, both physical and spiritual. If physical freedom is not yours because of where you live, spiritual freedom is always available. “So, if the Son sets you free, you will be free indeed” (John 8:36). Unbelief is the only wall that can separate you from this liberty.

May God’s freedom be yours today. 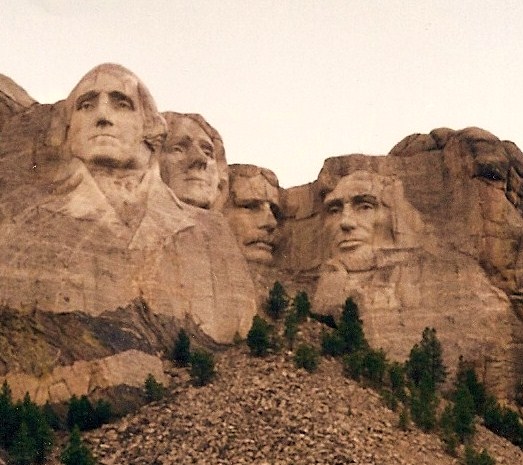 "Mount Rushmore National Monument Official Guide" and America's Shrine of Democracy by T.D. Griffith were used as a sources in this post.
Posted by Beverly Varnado at 8:48 PM