Yes, that’s mostly what we saw when we visited Reptile Gardens, a stop on the way from our hotel room in Rapid City to Mt. Rushmore. I want to support my herpetologically inclined son in all his endeavors, but he has stretched me to the limit on this one. I’ve spent many a Saturday out a local nature center on Snake Day studying all types of snakes. I never thought a copperhead and I would be nose to nose with only a quarter inch of glass between us.

But we have. Many times.

That’s only the beginning. For example, one day Aaron brought in a green racer wrapped around a pencil.

“Oh, Mom, isn’t he cute?” he asked as he shoved the snake up to eye level.

With game face on, I said, “He’s just a doll, but I bet he’s looking for something outside.”

He retreated to the yard and let him go. Whew! On other days, we’ve had any number of frogs, lizards, and snakes in the reptile ranch in Aaron’s bedroom. (For those who might not know, a reptile ranch is just a plastic reptile enclosure. Ours is almost worn out.) And how can I forget Blackie, a King Snake who lived in our yard and was the resident rodent remover. I actually kind of liked him. In fact, I was upset when he wandered into a neighbor‘s yard and met an untimely death to decapitatation.

Aaron had seen the signs on the road for Reptile Gardens which claimed to have the largest collection of reptiles in the world, and that was it. Once more, I was nose to nose with critters I’d normally walk a hundred miles to avoid. On our field trip form, Aaron made me write his favorite part was Death Row. I’d almost forgotten that. He hadn’t. It featured the ten most venomous snakes in the world. \ 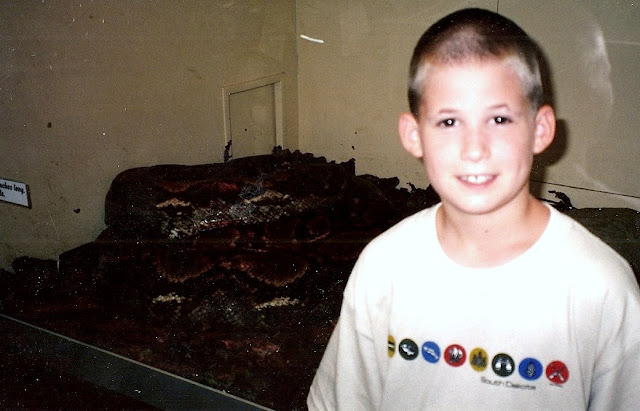 Aaron had his picture made with a reticulated python and another shot with an alligator.

Nobody asked me, but my favorites were the prairie dogs in the outdoor exhibits.

Aaron bought a black tee shirt emblazoned on the back with large white letters, which read, “Go Wrestle a Gator.” Weeks later Aaron would be wearing that shirt just below me on a down escalator in the Boston Subway system. Two construction workers laboring in the “Big Dig” walked down beside me. One of them punched his buddy in the ribs and pointed to Aaron.

Words of Jesus that I pray for my son, "I have given you authority to trample on snakes and scorpions and to overcome all the power of the enemy; nothing will harm you" (Luke 10:19).
Posted by Beverly Varnado at 4:01 PM