One Ringing Bell News Update: Lucy to the Rescue, Again, and other news

ONE RINGING BELL NEWS UPDATE—The staff at HQ has enjoyed watching several recent sporting events including the Women’s World Cup and the British Open. The animals at headquarters also seemed to have been swept into the excitement.

The tuxedo, Wilbur, has been especially mesmerized by the television coverage.

Here he is watching the United States and France match. 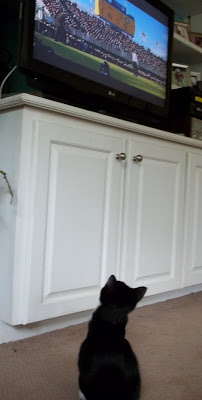 And again keeping an eye on the ball during the British open.
Wilbur, a muscular boy already, shows strong promise for future sports participation. And with this early interest, why he might turn up in some world events himself.

In other news, the staff at HQ recently had an opportunity to take a long needed respite from their daily responsibilities. On arriving at their seaside vacation spot, one junior staff member overheard a conversation between Lucy and Charlie who'd accompanied them on the trip.

“The new bed the staff purchased for me is really hard. I toss and turn all night,” The senior poodle Charles commented. “If they had to sleep on this bed, they wouldn’t put up with it for one night.”

Excited about the vacation, the staff member dismissed the conversation thinking only that Lucy might make an appeal for a new bed on Charlie’s behalf.

You can imagine the shock of all the Ringing Bell staff when they returned from a few hours at the ocean and found this scene. 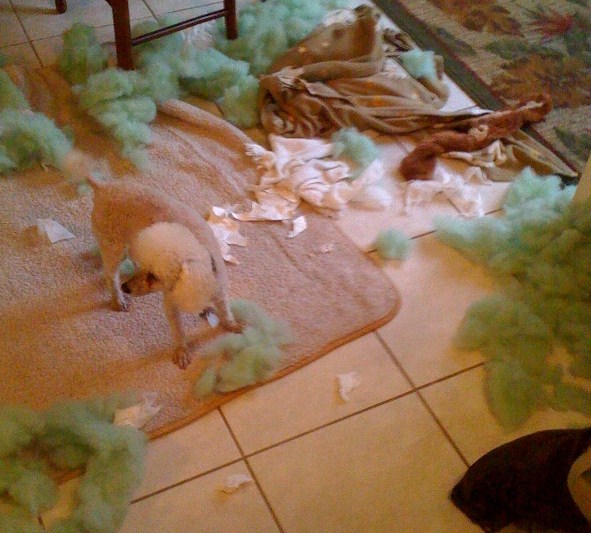 Lucy had decided to take matters into her on hands. She carefully removed all the stuffing from the outer covering of the new bed, and chewed up the inner covering. While she was on a roll, she also ate her dog food, paper plate and all, pulled down a curtain and yanked a blanket onto the floor.

But, Lucy and Charlie’s plan worked. A junior associate pushed all the stuffing back into the outer covering, and a senior staff member sewed up all the holes. Charlie slept peacefully on his new much fluffier bed.

“Thanks, Lucy,” someone later heard him murmur in his sleep.

Even when away from headquarters, the animal antics just keep rolling.

"A cheerful heart is good medicine, but a crushed spirit dries up the bones"( Proverbs 17:22).
Posted by Beverly Varnado at 9:58 PM