Somewhere between Sheridan and Gillette, Wyoming, I started crying.


Jerry pulled over at a scenic overlook, where I stepped out of the car, sat on a bench and just boo-hooed. The kids wanted to know what was wrong. Jerry knew. It’d been twenty years since I’d seen the Rockies and I was having a hard time saying good-bye. Would it be twenty more years until I’d see them again? Sitting there on the side of the road with the mountains still in view, I got it out of my system. Even as I write now, though, there’s wistfulness for that very spot in the road. 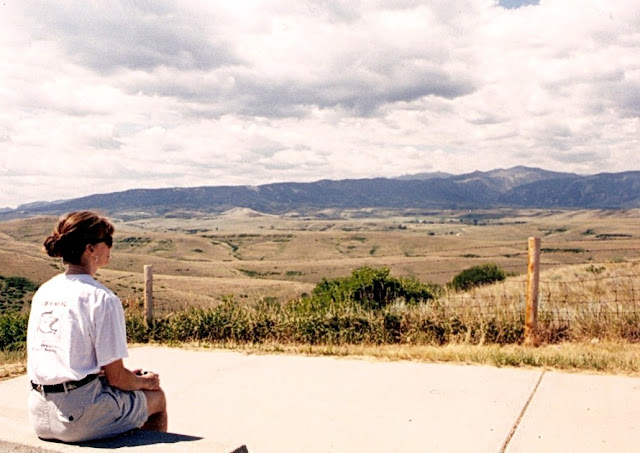 Oh, how I love those majestic peaks. One of the reasons might be they remind me of the first few weeks Jerry and I were together.
We’d been seeing each other only a short time, when I received an unusual call from him. At the time, I was a buyer for a department store. I picked up the receiver of the ringing phone on my desk.
“Hi, how’d you like to go to Colorado with me?” he asked.
I couldn’t believe he was asking that, since both of us knew exactly where God had set the boundaries in our relationship. I guess the silence on my end of the phone made him realize he needed to provide a quick explanation.
“Don’t worry, we’ll be well chaperoned by another couple, and hundreds of high school folks at a Young Life Camp north of Denver, Colorado.” At the time, Jerry was the chair of the local Young Life Committee.
I’d never been west before. “Yes,” I said. “Definitely, yes.”
That week we did everything the kids did, horseback riding, chapel times, white water rafting, and climbing the very tall mountain. I woke up every morning to the soothing sounds of cascading waters outside the cabin that I bunked in with some of the female workers.
A now well-known country-Christian musician, a good friend of the camp director, was at the time recovering from an accident, so he chose to do that in Colorado with his friend. I still remember “Colorado Rocky Mountain High” as he sang it that summer.
Yes, I’m sure that happy time has something to do with my love for the Rockies.
But there’s also this: At that spot in the road, I was reminded that these magnificent Rockies point to God’s strength and power which encompasses his children at all times and in all places. Their beauty helps lift my heart to heaven. They inspire praise to their creator.
Once more, I wanted to stay, but I knew God had other plans for us. So, I dried my face, and  with a last wistful glimpse I said good-by, but to this day, through many trials, I have carried these words in my heart, “As the mountains surround Jerusalem, so the Lord surrounds his people both now and forevermore” (Psalm 125:2).
Posted by Beverly Varnado at 8:34 PM