Dream Summer: Our Last Stop at Where it Began--Williamsburg

We navigated around Washington D.C. on I-95 late Sunday evening, and as we crossed the Potomac, the lights of the capitol building sparkled in the distance. It made me wistful for the week we spent in Washington only two years prior. I wanted to drive around Washington awhile, but my crowd was exhausted, and we still had a good bit of ground to cover before we reached Williamsburg, our final destination for this summer in 2001. I turned around in my seat and looked back until the lights of our statehouse faded from view. I shiver when I remember those moments in late August and the unfolding plan to drive a jet through our nation’s capitol a few days later on September 11—a plan, thankfully foiled by brave men and women willing to sacrifice their lives. 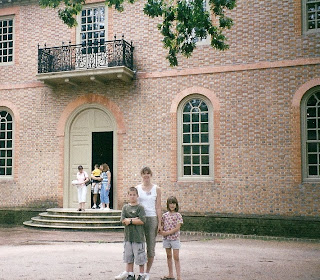 It’s odd that Williamsburg was our last stop, considering that in so many ways this is where we began. In 1607, Williamsburg became the first permanent English settlement established in America, and in 1699 was designated the capital of Virginia. 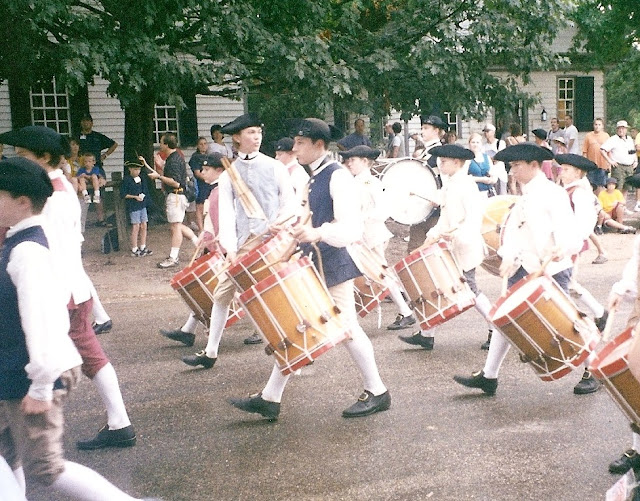 Today, it’s perennially l775 in Colonial Williamsburg, and the talk is about revolution for Virginia is still a British colony. Always in character, the employees speak from their vantage point over 200 years ago. It seemed to me an extra degree of accomplishment on their part considering the temperatures were in the 90's and they were dressed in several layers of l8th century garb. On every street corner, in every house, or public building, there’s always something to learn.


Williamsburg’s most famous citizen was, of course, Thomas Jefferson. He arrived in l760 to attend the College of William and Mary and was later elected to the House of Burgesses in l769. It was in the House of Burgesses, he had the opportunity to hear Patrick Henry deliver his impassioned speech against the stamp act, a crushing tax on printed-paper. Here on May l5, 1776, Virginia’s legislators signed a resolution for American independence. Later on June 7, a motion based on this resolution would be introduced on the floor of the Continental Congress. This would lead to the drafting by Thomas Jefferson of a document called the Declaration of Independence.


One can hardly thumb through the pages of history and put a finger in a spot where, though there may be great good, there’s also evil. It’s just as true in Williamsburg. Here, as in the rest of Virginia, there was a social structure based on race. The same criteria, which established Williamsburg as the capitol of Virginia, were also important in making it a place of disbursement for many of the 600,000 slaves, which were brought to British North America from Africa from the sixteenth to the nineteenth centuries. While the streets of Williamsburg resounded with the word “freedom” in l775, this freedom was elusive for those who had been tragically torn from home and families against their will and forced into subjection.


As we toured the homes of Williamsburg, our nine-year-old Bethany started to melt. Whether the heat, a nagging ear infection, or the history, the next morning it was clear she wasn’t going anywhere, so Jerry (bless his heart) stayed with Bethany, while Aaron and I finished the tour.


Mysteriously, Bethany improved enough on her day at the hotel that she convinced her Dad to take her to the swimming pool. Hmm. History has had this same effect on her before. I remember after four days in Washington D.C., her comment had been, “I’m about tired of this Washington place.” That’s when we decided to go to the National Zoo instead of the White House the last day. I suppose if there were an American History barometer in my children, about this time in the summer there’s would have read one hundred percent saturation.

I suppose saturated is a good way to describe our feelings. We had the privilege of traveling all these miles and seeing these wonderful places and learning so much this summer. We were overflowing and needed some processing time.


But it was not to be anytime soon.
Here for a moving performance of the Declaration of Independence or an excerpt from the mini-series, John Adams, on the approval of the Declaration.
"Blessed is the nation whose God is the Lord... "(Psalm 33:12).
Posted by Beverly Varnado at 3:33 PM