A Couple of Fishy Stories 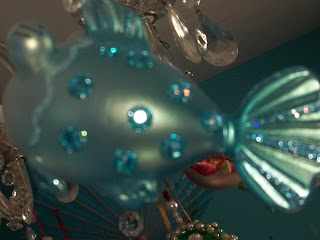 My daughter loves all things fish.
But last fall, she went off to  school and left her finned friends for me to feed. 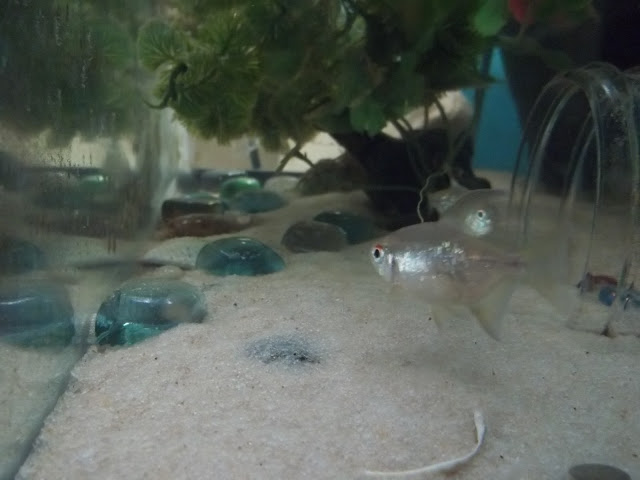 
I just knew either I’d kill them or some of my furry associates would. I’ve caught the felines with their mitts in the tank several times. Last spring while my daughter was still here, several fish mysteriously disappeared. I hate to name names, but I’m pretty sure it was a lovely ragdoll, Isabelle, who had a snack.


Nine months after my daughter left, I’m happy to report that all fish are still alive. What’s weird is I thought there were only four fish in the tank, but last week I saw one more.


I thought someone had a baby, but my daughter said it’d be a near impossibility to have an egg survive the filter or a live hatch to avoid being eaten. I don’t know about that. All I know is the fish number five. Maybe one of them has been living under a rock for eight months. In any event, I’m thankful I kept those guys alive, and maybe even brought another one along.


So, I’m telling my husband yesterday about the mystery fish as he’s returning from several days in a wilderness area, and he cranks up with his own fish story.


It’s not so much about the fish he caught. It wasn’t especially big—just a three pound bass.

His friend, Billy, caught and released an even bigger one, though,  that weighed around six pounds.


For a time Billy, a world-class sportsman, refused to let Jerry take a turn paddling the boat. Jerry was amazed that Billy only watched as Jerry cast his lure out into Beaver Pond.


Later as several men sat talking, Billy said something unusual happened earlier. He said, “Usually when you catch a big fish, the person with you throws their lure in the exact spot where you caught yours. Often, there’s another large one in the same area.” He paused. “Jerry didn’t do that. He just watched as I reeled mine in and enjoyed the moment with me.”


Wouldn’t it be a wonderful if we could always remember to do what these guys did? To just rejoice with those who rejoice, instead of trying to outdo. Competition can be a good thing, but it can also cause us to lose sight of what’s important. We’re so often afraid someone else’s success will take something away from us.


I love how Eugene Peterson translates Romans 12: 9, 10, and 15 in the Message, “Love from the center of who you are; don’t fake it…Be good friends who love deeply; practice playing second fiddle… Laugh with your happy friends when they’re happy; share tears when they’re down…Make friends with nobodies; don’t’ be the great somebody.”


Sometimes, I struggle with being too competitive, so I'm putting this on my to-do list this week: Practice playing second fiddle.


And as I do, I’ll be peeking in at the aquarium.


I have to say those fish are starting to grow on me.


Did I really just say that?
Posted by Beverly Varnado at 9:15 PM

Email ThisBlogThis!Share to TwitterShare to FacebookShare to Pinterest
Labels: 10, 15, Romans 12:9