“Adventurer Fred Birchmore dies at 100,” read the newspaper headlines on Monday morning. Birchmore, a local legend also has an international following, as he is one of the few people who have ever bicycled around the world. The bicycle he used on the trek now resides in the Smithsonian museum. He’s also known for the feat of walking down the steps of the Washington Monument on his hands.


A Smithsonian Magazine article about him notes that Birchmore had an encounter with Adolf Hitler on his mid-thirties world trek, and that Birchmore received skating lessons from Sonja Henje also on that journey. Really, he did so much for so long; you just have to read his books, Around the World on a Bicycle, Tales of a Happy Wanderer, Miracles in My Life, and the many magazine articles about him to begin to get a picture of the breadth of his adventures. 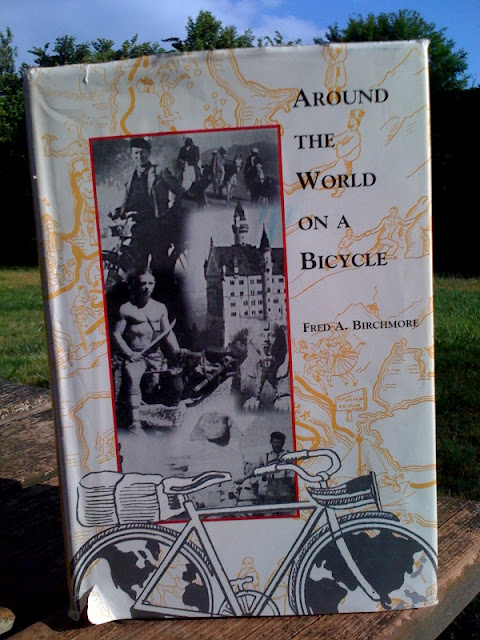 Fred Birchmore and I were only acquaintances. My husband, Jerry, knew him better and for a much longer time. But every member of our family has heard his stories as we ran into him at the YMCA where he’s been working out for ninety years.


I would say though, that Fred Birchmore and I had a moment about a dozen years ago. The Birchmore family had been long time attendees of the Poplar Springs Camp Meeting where Jerry was asked to preach several summers. We enjoyed the Birchmore’s hospitality as well as Fred’s wonderful stories during our visits with them at the camp meeting.


One afternoon I came out of our tent and took a seat on the porch (tents are primitive earthen floored wooden structures which house attendees during the week). I tried to be as still as possible as temperatures that day approached one hundred degrees. I’d been out on the porch for some time when I caught movement out of my peripheral vision. It was Fred coming out of a handstand next to a tree. I hadn’t even seen him until then. He looked at me and said, “I used to be able to do that for hours.” He was almost ninety years old at the time.


Some of the definitions Mr. Webster assigns to the word adventure are “a hazardous undertaking, an unusual or suspenseful experience, to venture or dare, to take risks.”


Fred Birchmore was an active member of his church until his death. At twenty-eight years old, he concludes his 1939 account of his world tour return in “Around the World on a Bicycle” this way:


“In my wanderings I had missed the familiar sight which had always confronted me when I looked out of my window. Now as I looked upward at the majestic Methodist church steeple glistening in the golden sunlight of the early morning, I knew I was home.


Memories of the last sermon I had heard in the old church still lingered in my mind and heart. After portraying Paul’s journey through life the preacher had closed with a quotation from that great apostle’s last words as he reached the end of the trail; ‘I have fought a good fight;’ I have finished my course; I have kept the faith; henceforth there is laid up for me a crown of righteousness which the Lord a righteous judge shall give me at that day’ (2 Timothy 4:7-8).


…With one last look at that supreme symbol of security and stability for which my restless soul had been searching, I turned over and slept the peaceful, dreamless sleep of the weary.”


It’s important to note that a cross tops the steeple of the church.


“…Sailing over seas uncharted to a port that none has ever seen.” C.S. Lewis in his Prologue to The Quest


Like Birchmore, we will find the cross the only source of security and stability for our uncharted journey.


Fred Birchmore has finished the course. He’s probably cycling heaven about now taking in the sights.


But nothing would have brought him more joy than for us to live our lives in such a way with God that we might also be called adventurers when we reach the end of the trail.

Posted by Beverly Varnado at 9:15 PM