An Improbable Journey and On a Movie Set

Just like the books that seem to multiply during the night around here, we’ve been given so many music and message CD’s through the years, we lose track of when or where they originated. Recently while sorting through them, I found one entitled, "Don’t’ Waste Your Life.”


The CD's accompanying literature suggests we ought to be centering our lives around something other than collecting stuff, retirement, or playing.
Kind of flies in the face of our culture doesn’t it?


I haven’t listened to this CD yet, but I don’t think the speaker is talking about recreation to recharge. I believe he’s speaking to those who would center their life around playing. Some folks I know use retirement as an opportunity to serve and minister to others like my friends Dick and Barbara Anderson. And collecting stuff? It seems fun for a season, but ultimately there comes a day when someone has to uncollect. And that my friends, is a terrible job.

I could’ve never imagined twenty years ago that I’d be doing at this point in my life what I’m about to do in a couple of days. It seems so, I don’t know, improbable. On Wednesday, while others hold down the homefront, I’m going to be joining the cast and crew of A Season of Miracles as they produce Rusty Whitener’s grace filled baseball story, which started filming last Saturday. 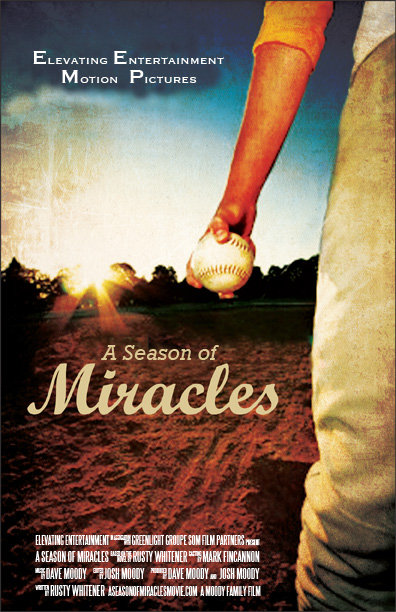 Dave Moody, the producer, also holds an option on my script for Give My Love to the Chestnut Trees. Somehow, knowing my friend Rusty’s script is being produced gives me hope that mine, too, will one day go into production.


I’ll take a break from writing the first draft of a novel, which I’m just a few days away from completing. One of the themes in the novel is perseverance, and I have to tell you it has taken a greater measure of perseverance to get to this point in the book than I could’ve ever imagined. In fact, about halfway through, I thought I’d lost my way. Somehow, through a lot of prayer, God helped me find it again.


By God’s grace, this makes novel number four, as well as five screenplays I’ve written in the last few years.


I don’t want to waste my life. I just keep working, following this call I believe God has for me, even if it all does seem so improbable. Even when I hear in my head, “What are you doing?” or“Who do you think you are?”


It’s true that at times, I don’t feel I know what I’m doing. And for sure, I seem the last person on earth who ought to be doing these things.


I could make a long list of my disqualifications.


But when I feel this way, I open up a folder entitled, “Why I Write.” It’s filled with notes about the reasons I believe I’m called to this path. These entries serve as a reminder that I didn’t just make all this up. These are God’s plans, even when a sense of inadequacy threatens.


And yes, it’s scary. Just before the release of “Give My Love to the Chestnut Trees” a few months ago, I told my family they might have to change their names and move to another state. I was so afraid of embarrassing them. But, thankfully, they seem to have weathered the last few months pretty well.


He may be calling to you right now. And it may be to something you never could have imagined. If He is, don’t miss the journey.

"By no means do I count myself an expert in all of this, but I've got my eye on the goal, where God is beckoning us onward--to Jesus. I'm off and running, and I'm not turning back. So let's keep focused on that goal, those of us who want everything God has for us" (Philippians 3:13-15).


For updates on A Season of Miracles production, click here.
Posted by Beverly Varnado at 4:04 PM

Email ThisBlogThis!Share to TwitterShare to FacebookShare to Pinterest
Labels: A season of Miracles, Dave Moody, Give My Love to the Chestnut Trees, Philippians 3:13-15, Richard and Barbara Anderson, Rusty Whitener

Excellent stuff, Beverly. I pray that your script is on the silver screen very soon. I'll be on the set next Friday to get a taste of the action. Thanks for sharing your experiences here.

Donald, hope you have as great an experience as I did. Many blessings to you and have a safe trip. Bev