If you’re still looking for an Olympic moment

When we use the phrase “Olympic moment,” we usually picture shining eyes, raised flags, and medals.


But today as the athletes return home, what about the ones who finished a few hundredths of a second short of a medal, or the ones who had to drop out at the last minute because of injury, or other setbacks, which might have prevented them accomplishing all they hoped.


What about their “Olympic moments?”


At our house, on Saturday night, we watched Tom Brokaw’s powerful documentary about Great Britain’s valiant fight during World War II. With the rest of Europe already fallen, Hitler unleashed his furor on Britain in the fall of 1940 and into 1941. One of the places Brokaw visited to depict the extent of bombing during the blitz was the city of Coventry.


Years ago, my husband and I embarked on a study tour of England. We visited many of the old and beautiful cathedrals, but I was taken most by the comparatively new cathedral completed in the city of Coventry in 1962. During World War II, German bombers flew over the city for eleven hours and almost destroyed the city including its twelfth century cathedral. 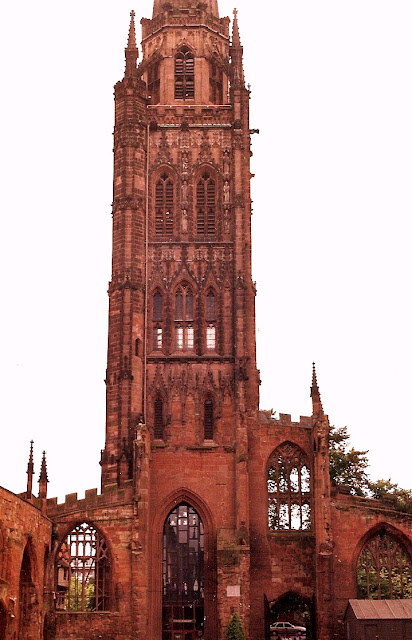 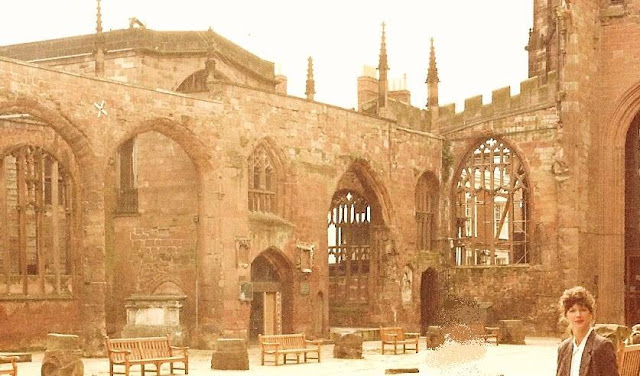 At daylight, as a small group met in the ruins to survey the damage, they committed to rebuilding the cathedral to the glory of God.


That morning, the cathedrals’ stonemason took two of the partially burned oak beams, tied them together, formed a cross, and erected it in the midst of the rubble.


The ruins of the cathedral were deliberately left standing as workers erected a new one beside it. Depicted prominently in the documentary last night, a huge sculpture of the Archangel Michael standing on the head of Satan covers one exterior wall of the new cathedral. The sculpture can be seen on the exterior of the new structure from the ruins of the old.


At the time of our visit to England over two decades ago, I struggled with depression.


During one of low points in my battle, I stood before a cross formed from the charred beams of a bombed out cathedral. 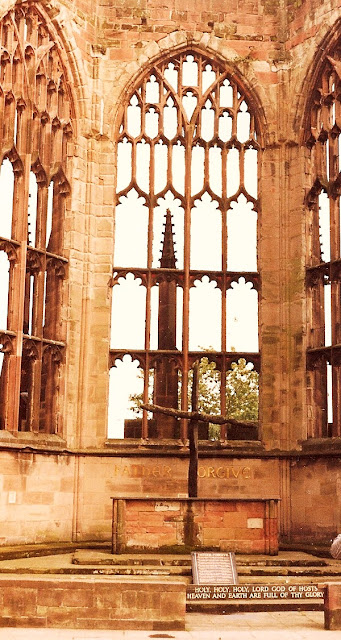 That time became for me an “Olympic moment.” There were no medals, no feelings to carry me, just the sense of the Lord speaking. I knew that in order for my life to be any different, I would have to believe Him--believe that he could form out of the ruins of my life a cathedral for his glory. I had to trust that with God’s help, I could crush the enemy under my feet.


Sometimes, “Olympic moments” look and feel anything but that. In fact, often, we may not even realize we’re having one. It’s only in retrospect, as we look back across the months and years, that we see a turning point. Like those who missed their shining time on the podium at the Olympics, we often have to decide what we’re going to carrying away from disappointment and heartache. Will we be able to focus on the gracious gifts God continually bestows on us, or only our failed expectations and seeming defeats?


So many times, if we allow them to, those low points, give birth to our greatest achievements.


Brokaw’s documentary was called “Their Finest Hour” taken from Winston Churchill’s speech to the House of Commons in June of 1940.


“Let us therefore brace ourselves to our duties, and so bear ourselves, that if the British Empire and its Commonwealth lasts for a thousand years, men will still say, This was their finest hour.”


If you’re still looking for an Olympic moment, listen closely to what God may be saying to you. Your finest hour may not shine as you thought it would, but nonetheless, God longs to use it to accomplish great things through you.

"But we have this treasure in jars of clay to show that this all-surpassing power is from God and not from us. We are hard-pressed on every side, but not crushed; perplexed, but not in despair; persecuted, but not abandoned; struck down, but not destroyed. We always carry around in our body the death of Jesus, so that the life of Jesus may also be revealed in our body" (2 Corinthians 4:7-10).
"The Lord your God is with you, he is mighty to save" (Zephaniah 3:17).

Posted by Beverly Varnado at 5:17 PM