Hard to be green

Went into the den this week and saw a scene similar to this, but at the time Misty was on the floor in the same position as Wilbur--both of their eyes fixed on something. 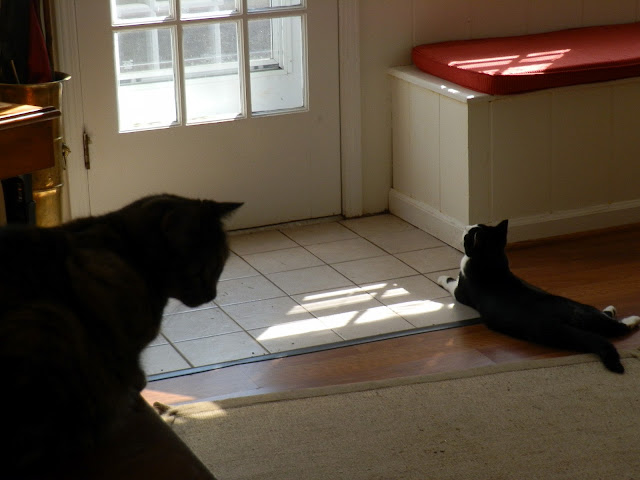 From experience with this behavior, I know there’s life in the house besides our usual critters. Once, we observed this patient stalking outside the laundry room. I later went in to scoop a little birdseed from a sack, and a mouse leaped out at me. Of course, I let go the requisite scream and Misty and Isabelle sprang into action. I can’t remember what happened next--a block in my memory.


So, when I saw the cats sitting patiently, occasionally snapping their tails, I started looking myself. At first, I thought it might be a moth or a cricket, from which the cats like to tear off wings and legs I am sad to report.


However, here’s who I found perched on top of the storm door closer. 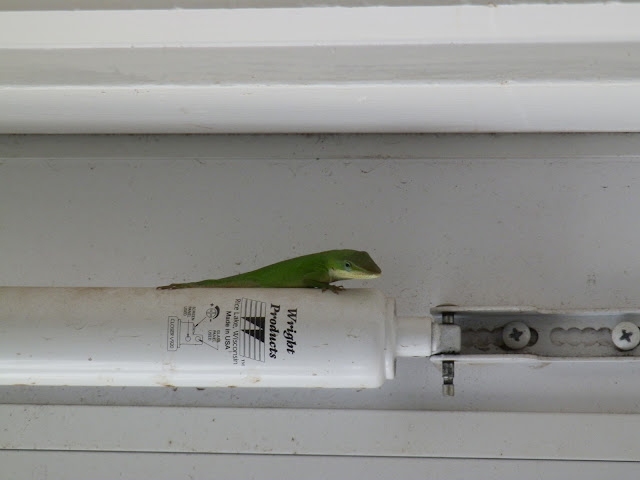 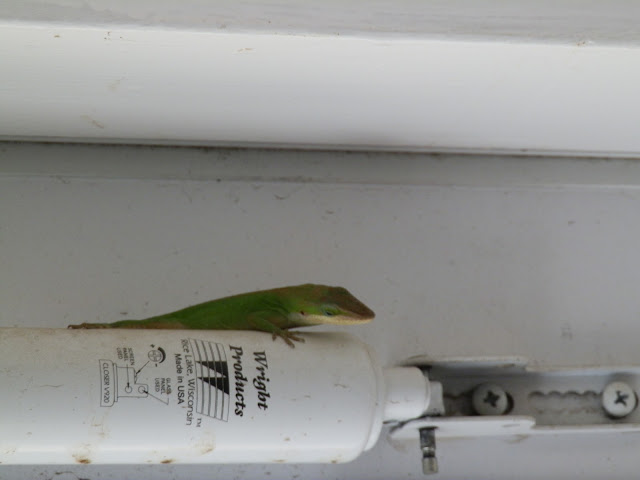 In consultation with my wild life biologist-to-be son, I found it to be a Polychrotidaeor or anole. Commonly referred to as an American Chameleon.


You have to marvel at a green lizard that can change colors depending on its surroundings.


Sometimes, we admire people who can change colors. For example, missionaries who manage to become a part of a very different culture than their own in order to communicate the gospel.


Other times, changing colors is not so good. When we merge into our own culture in such a way, that there appears to be no difference between those who don’t have the life of Christ in them and us, we’ve strayed far from God’s call.


The Message puts Romans 12:2 this way: “Don’t become so well-adjusted to your culture that you fit into it without even thinking. Instead, fix your attention on God. You’ll be changed from the inside out. Readily recognize what he wants from you, and quickly respond to it. Unlike the culture around you, always dragging you down to its level of immaturity, God brings the best out of you, develops well-formed maturity in you.”


I had the opportunity at the recent American Christian Fiction Writers Conference to be in a discussion led by the former publisher of Thomas Nelson, Allen Arnold. Repeatedly, I’ve been in groups where someone brings up the restrictions  publishers in the Christian market have concerning certain language and actions. Arnold responded by agreeing we have a responsibility as writers to be honest in our portrayals, but he went on to say, there should be a difference in what we write from what’s found in the general market. If we start allowing the same kinds of things in our writing, he said, we’ll be like the frog swimming in water, which gets warmer and warmer eventually boiling the frog.


I have to agree.


The way we guard against this as Paul said in Romans is to fix our attention on God instead of our culture.  We meditate on His word, and allow it to change us.


Wherever God has us in the world, he wants to strengthen us to withstand the ways the culture tempts us to be a chameleon.


In the immortal words of Kermit the Frog, “It’s not easy being green.” But if God calls us to be green in a world going brown, let’s allow Him to help us do all we can to stay that way.


Posted by Beverly Varnado at 5:34 PM