Finishing another edit of a screenplay, so I’m turning my attention to some other projects, which have languished long on my to-do list.


I’ve been crawling around in one of the attics this week. We have three. Thankfully, one of them is empty.


For those of you who have spotless attics swept clean with boxes carefully labeled, you’ll want to skip this post. It’s not for you.


How’d so much stuff get up there?


Try home schooling for eight years. So far, I’ve counted five bins of schoolbooks. There’s probably more, because I’m only a third of the way through this attic. Add to that the kid’s art projects I couldn’t let go. It’s just always been easier to poke stuff I didn’t know what to do with in the attic and deal with it later. Later has arrived. Can you say procrastinate?


Through the years, it was a no brainer to carry odds and ends to Goodwill--clothing and linens to a ministry for the homeless, but what about that box of costumes my kids wore a thousand days, so tattered no one else would want them? I can still see my son in the cowboy chaps and my daughter in the yellow tutu.


I know, I know. Our memories are not tied up in our things. But, right now, this Mama with the starkly just empty nest can’t take some of this to the dump.


Still, after many hours yesterday, I almost filled up the recycle bin, added to our load for the landfill, and crated several boxes to carry off to various places.


I have much work ahead squinting and poking around in the darkness, while trying to avoid roofing nails overhead (sad to report no overhead insulation in this old house).


Some of the blasts from the past brought me to tears.


A message from a long ago Valentines Day--


A project from Sunday School— 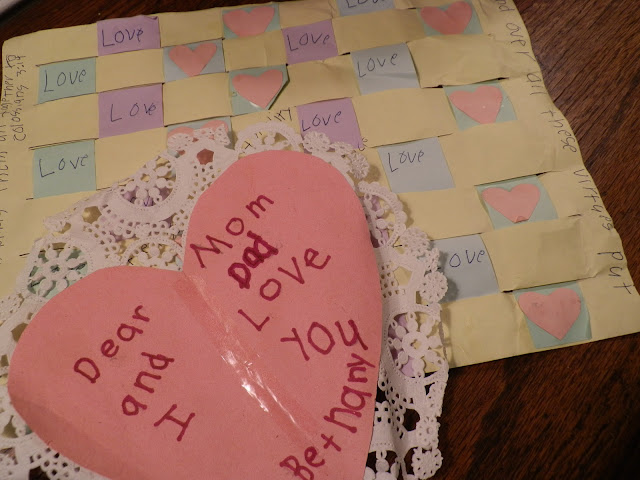 “I will give you the treasures of darkness
And hidden wealth of secret places,
So that you may know that it is I,
The Lord, the God of Israel, who calls you by your name”(Isaiah 45:3 NASB).


Way up there in the darkness, in the midst of a hard project, God called me out through these treasured messages of grace and love from little kids long grown into young adulthood.


Makes me think of another dark time just after I’d had breast cancer surgery when I battled fear one night until the early hours of morning. The thought, “You’re going to die,” hounded and hounded. Then, just before dawn, God’s love and peace overwhelmed me—a treasure in the darkness.


“I’m absolutely convinced that nothing—nothing living or dead, angelic or demonic, today or tomorrow, high or low, thinkable or unthinkable—absolutely nothing can get between us and God’s love because of the way that Jesus our Master has embraced us” (Romans 8:38-39 The Message).


And from my own experience, I know that cancer and dark attics can’t get between God’s love and us either.


Praying His treasures for you in your own dark times, friends.

Posted by Beverly Varnado at 8:25 PM

Thanks so much for your words today. Getting my results tomorrow from my biopsy and this spoke to me when I needed it.

Dan, you've been so much in my thoughts and prayers. Wondered when you might hear about results. I know the difficulty of waiting for test results. We continue to lift you to the Lord who I know stands with you during this time to strengthen and encourage you. May you be expererience in a real way the embrace of the Father. Much love to you and Brenda, Bev