In my last entry, I announced I'd be running a few of my top posts from the almost 400 I've written over the last three years. This one from February of 2011 was posted about a month after my husband was diagnosed with an aggressive form of prostate cancer. I have the joy of sharing that now, two years after he finished his treatment, his test results continue to show a decline in his PSA. We are so grateful.

Here at our house, we’re in an all too familiar holding pattern waiting for test results. My husband Jerry, recently diagnosed with prostate cancer, had a bone scan last week and a cat scan yesterday. We won’t know until next week whether the tests will tell us what we want to hear--that the cancer is confined to the prostate making him eligible for a wider range of treatment options.

To that end, we rented Secretariat this past weekend. 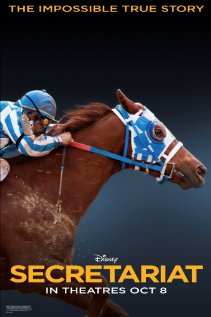 Sadly, life has been in such an upheaval here, we missed it when it was in the theatres. We watched the movie not once, but twice, and we may watch it a third time. In addition to the pure enjoyment factor, as a screenwriter, I can justify watching so much by calling it research.

I, along with most of the other writers and film folks I know, hold Secretariat's director, Randall Wallace, in high esteem. Among his other credits are The Man in the Iron Mask, We Were Soldiers, Pearl Harbor, and the Academy Award winning Braveheart. Wallace shares openly about his Christian faith and the way it influences his work.

In an interview in Duke Divinity School’s, Divinity Online (He was a former seminary student there), he talked about a statement made by theologian Reinhold Niebuhr which was life changing for Wallace. “Niebuhr said that the genius of Jesus of Nazareth is that he found the holy not among the monastic, but among the profane. It reminds me that life is to be lived, to be plunged into, rather than withdrawn from.”

In a CBN article, Wallace says about his faith, “My faith isn't built on my own understanding of things. My faith is built on the idea that, or on the experience that, life is greater than I can imagine it to be.”

This is reflected in the line he wrote for Penny in Secretariat, “This isn't about going back. It's about life being ahead of you, and you never know how far you can go unless you run at it."

Wallace says he’d like the audience to take away “not just to live, but to live passionately; to live with joy and exuberance.”

In the same article, Wallace is asked about his statement, “a championship heart is a normal heart until it hears and responds to the call of a miracle.”

Wallace responds, “Yes. Well, that's what I think, that all of us are made in a miraculous way, that to live at all is a miracle. To love is an even greater one. It is love that makes the normal extraordinary."

Those of us who feel called to write have much to learn from Randall Wallace.

And the messages he espouses are pretty good for a man facing cancer, too.

So, Jerry, are you listening?

You, Jerry, have the heart of a champion. You proved it on the University of Georgia football field as a one hundred and sixty five pound player on Vince Dooley’s first three teams. You worked hard and wound up playing first-string defensive end for a SEC championship team. You proved it when you left a successful law practice and the life style which accompanied it to follow God, obtain a seminary degree, and become a pastor.

Jerry, listen to your heart. As Wallace says, “run at it.”

And here in this profane thing called cancer, together we will allow God to help us find something holy.

Thank you, Randall Wallace, for following God's call on your life.
Posted by Beverly Varnado at 5:00 AM