When you're looking for inspiration in entertainment 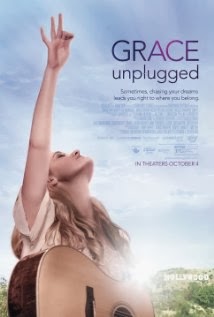 Last week, I had the privilege of attending the Movieguide Faith & Valor Banquet in Atlanta where Chris Zarpas , producer of Grace Unplugged (now in theaters), delivered an inspiring message.


After a career that included production of several films, and a stint as a vice-president at Walt Disney, Zarpas left the entertainment industry for several years. His motivation to do so came from Matthew 16:26 , “What good will it be for someone to gain the whole world, yet forfeit their soul? Or what can anyone give in exchange for their soul?” Zarpas didn’t want to continue making compromises that he felt were not pleasing to God.


He wondered if he’d ever make another movie, but then Grace Unplugged came along.


He along with several other speakers applauded the work of Movieguide publisher, Dr. Ted Baehr, who has labored tirelessly to help redeem “the values of the mass media of entertainment.”


Most of the speakers including Zarpas suggested that any Christian entertainment we’re watching today is directly or indirectly a result of the many decades of work by Dr. Baehr.


Dr. Baehr, in conjunction with the John Templeton Foundation is responsible for establishing the Kairos Prize in screenwriting to help encourage writers to pen faith based scripts, as well as the Epiphany Prize for “Most Inspiring Movie,” and “Most Inspiring Television Program.” I’m honored to have been a finalist for the Kairos Prize a few years back and a semi-finalist for the last couple of years.


I received a couple of take aways from my attendance at the banquet.


First, Dr. Baehr’s perseverance inspires me. Highly educated with a degree from New York University School of Law, he could have continued to have a career as an attorney but chose at personal sacrifice to devote himself to making God known in Hollywood. I’m sure Dr. Baehr has felt discouragement, but he has never given up. I’ve heard him speak many times, and have had classes with him, and every time I hear him, I feel renewed for the work ahead.


Second, the story of Telemachus. Dr. Baehr referenced one of Ronald Reagan’s favorite stories, and after a little research, I found Reagan used it in his remarks at a 1984 National Prayer Breakfast. Reagan relates the account of the monk Telemachus who put an end to the gladiator games in the fourth century with his last words, “In the name of Christ, stop.”


We also are called to intervene in the injustices, and cultural degradation around us. We are called to declare, “In the name of Christ, stop.”


This is what Dr. Baehr, Chris Zarpas, and others like them are trying to do through media. I hope to count myself in that number, as well. Your ticket to a faith-based film is your vote for wholesome entertainment and makes it possible for other faith-based films to receive funding and distribution. It’s your way of saying, “In the name of Christ, stop, ” to entertainment that has no redemptive value.

So, see Grace Unplugged  this week.


You may read Ronald Reagan’s National Prayer Breakfast remarks here and a wonderful review of Grace Unplugged here.
Posted by Beverly Varnado at 5:00 AM