But, I had all these pumpkins sitting around, and wondered what I could do with them. I’d been told years ago that the big pumpkins are hit or miss on texture and flavor, but still, I hated just to put them out in the mulch pile. From experience, I knew I’d have sprouts next year that’d produce a few baby pumpkins which either the deer or Lucy would quickly consume.


But, that’s another story entirely.


The first hit on my search was a link to Ree Drummond, the Pioneer Woman.   I'm not much of a pioneer woman myself, but I did once have a ten pound baby through natural childbirth, but that, too, is another story. I’d read Drummond had over twenty million hits on her site—last month alone! I thought if that many people turned to her for culinary advice, she must be trustworthy. So I clicked, and she had a great how-to for making pumpkin purée.


I checked the smoke alarm batteries, proceeded to the kitchen, and attacked a big pumpkin.


Since the Pioneer Woman has already done all the legwork on this, I’ll just share a couple of my own shots taking the pumpkin through the cutting, roasting, and puréeing and to prove to you I really did this. I tasted the purée and found it quite tasty. 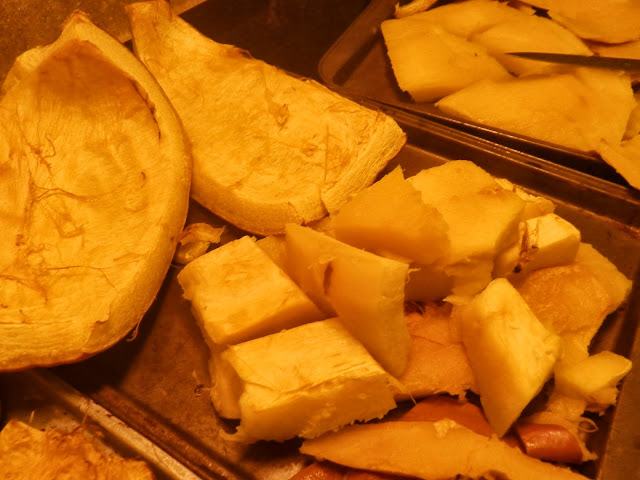 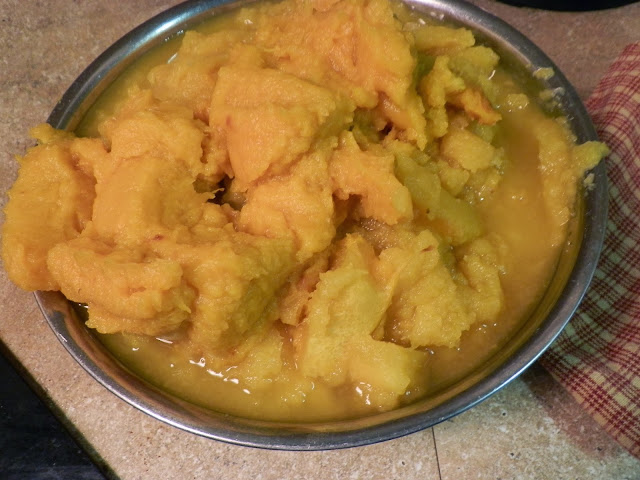 Emboldened by this success, I used another recipe for Pumpkin Muffins from the Pioneer Woman’s blog.


They turned out beautifully, and have been given the thumbs up from all parties here at One Ringing Bell including the husband and the son.


And I have six packages of pumpkin purée in the freezer for future muffins.


So, before you kick those pumpkins to the curb, you might think about eating them. With the largest component of landfills in this country being food, it’d be a real step towards greater stewardship of our resources.


I’ve been thinking a lot lately about what a redeemed tentmaker said in I Timothy 6:8, “But if we have food and clothing, we will be content with that.” And yet, we so seldom are. There’s always the more that we’re after--that I’m after. So, I’m trying to be conscious of God’s provision for this day, trying to be less wasteful, trying to be more grateful for what I already have.


And I imagine that if I persist in this, it will turn what is a season of gratitude into a lifetime of gratitude.


Now, I’m off. One pumpkin down, and two more to go. These should put me at about 18 packs of puree.


Stand back for pumpkin pies, pumpkin bread, pumpkin soup, pumpkin cheesecake, and even pumpkin pancakes. And don’t worry, I’ve stockpiled batteries for the smoke alarm.
Posted by Beverly Varnado at 5:00 AM