The death of an American President and finding our true country

The intercom in the third grade classroom crackles the words, “The President has been shot.” Several desks over, a girl laughs loud, her emotional reaction to something she doesn't understand. We are eight, and for many a new reality may be settling in.


I read recently that when boomers are asked where they were on the day President John F. Kennedy was shot, we most often respond, “In school.” A whole generation of us sat in oak desks pouring over new math and diagramming sentences unsuspecting the news hurling toward us would mark that day as one of the most memorable in our lifetime.


In the next few days, we’d watch grainy black and white footage of a president slumping over onto the lap of his wife, his blood staining what we were told was a pink Chanel suit. We didn’t have color television at our house, so we’d have to take the announcer’s word for it. We’d witness a son’s last salute as the hearse rolls by, and even though we'd only spent eight years on the planet, my classmates and I would feel the loss as the whole world mourned. I’d take out my little tea set made to look just like the one First Lady Jackie used, and wonder what would happen to us all. What would happen to our country?


On the same day an American President is struck down, across an ocean, another man dies. The events in Dallas eclipse his demise, and the death of Christian apologist, C.S. Lewis, is buried deep in the news.


Seventeen years later, as a woman edging toward a cliff of despair after years of struggling, I crack open Mere Christianity, and within its pages find hope at last. More than any other book except the Bible, this book and others by C.S. Lewis have guided my spiritual journey. 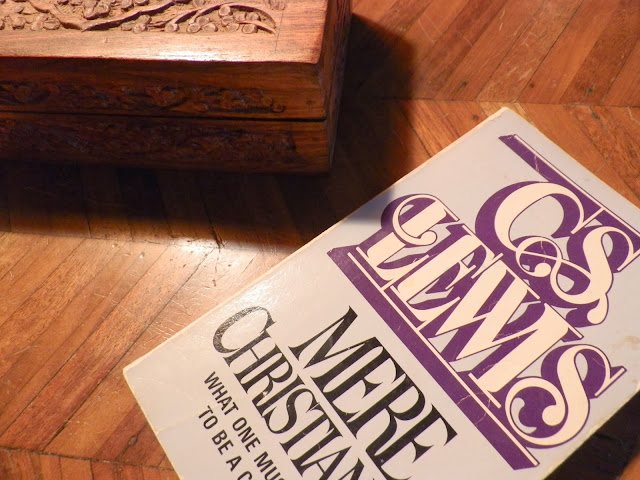 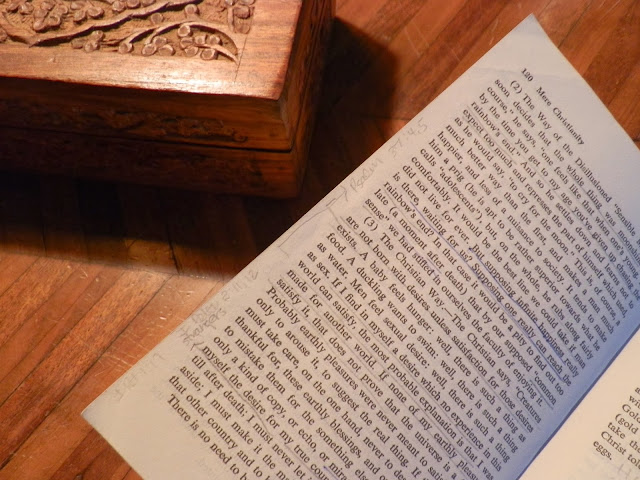 As the fiftieth anniversary of the death of President John F. Kennedy draws near on November 22, we will hear much about that tragic day in Dallas.


I do not remember the death of C.S. Lewis, and I expect the anniversary of his death will pass with far less fanfare than that of Kennedy’s. But his life has had a tremendous impact on our world. It’s said that D.L. Moody helped reduce the population of hell by 1,000,000 souls. I wonder how many C.S. Lewis’ Mere Christianity has diverted from a dark destiny. Only God knows.


My raggedy copy of Mere Christianity has a broken spine. When opened, it splits to a chapter entitled, "Hope"—the four pages most read and underlined in the whole volume. Hope is what I desperately lacked, and hope is what I found so many years ago:


“If I find in myself a desire which no experience in this world can satisfy, the most probable explanation is that I was made for another world. If none of my earthly pleasures satisfy it, that does not prove that the universe is a fraud. Probably earthly pleasures were never meant to satisfy it, but only to arouse it, to suggest the real thing. If this is so, I must take care, on the one hand, never to despise, or be unthankful for, these earthly blessings, and on the other, never to mistake them for the something else of which they are only a kind of copy, or echo, or mirage. I must keep alive in myself the desire for my true country, which I shall not find till after death; I must never let it get snowed under or turned aside; I must make it the main object of life to press on to that other country and to help others to do the same.”


What I didn’t know at eight years old when it seemed life was unraveling, and I was so fearful about the nation, is that God had another country for me—one which could not be touched by an assassin’s bullet.


C.S. Lewis helped point me to that country.


On November 22, I’ll remember again those moments in a third grade classroom and the assassination of a President, but I’ll be forever grateful for the work of one man who helped me know my true citizenship.


“But our citizenship is in heaven. And we eagerly await a Savior from there, the Lord Jesus Christ,  who, by the power that enables him to bring everything under his control, will transform our lowly bodies so that they will be like his glorious body” (Ephesians 3:20-21).
Posted by Beverly Varnado at 5:00 AM

Excellent meditation, and so true!

Like you, I was in school when Kennedy was shot. I had never realized that C. S. Lewis died on the same day. Hmm...which one has had a greater effect on the world? I appreciate your sharing your insights!

Thank you for your kind words, and many thanks for reading. Blessings, Bev

Something to ponder, Nancy. Again, thank you for taking the time to comment. Many blessings.

I was in second grade clambering up the steel steps of the stairwell with my classmates, when during the echoes of noisy little feet, we heard ".....was shot". We panicked, because we thought someone at school had been shot... Our teacher had quite the time trying to calm us and to get us to our destination. We were too young to understand the ramifications of that news, but we were not too young to feel the loss of the person we had been taught to respect and honor because of who he was...
Thanks for this entry. Your blog gives me comfort and "home" in this stressful world!

Dear Jill, thank you for taking the time to share your poignant words. Yesterday, one of my daughter's friends pointed out that they were in third grade during 911. So, for both us and our children, our early elementary years are indelibly marked by tragedy. With you, I thank God for our unshakable eternal home.