This post drifted up from the archives this week, and I thought January  might be a great time for all of us to remind ourselves to watch for the people God is bringing into our lives. 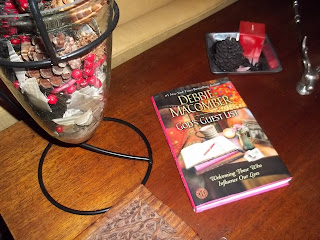 I just finished reading New York Times bestselling author Debbie Macomber’s book, God’s Guest List: Welcoming Those Who Influence Our Lives. Macomber spoke at the 2009 American Christian Fiction Writers Conference, but I wasn’t able to attend that year. I later heard about one of the intriguing addresses she gave which I believe aligns with the theme in God’s Guest List.

She writes how years ago she made a list of thirty people she wanted to meet, which at that point seemed highly unlikely. But over time, God sent them her way. But after a disillusioning experience with one of the people on her list who turned out not to be the person she thought he was, God spoke to her about making a list with thirty blanks to allow God to send the people he wanted her to meet. She writes, “God would send people into my life? An open list. A guest list. It was as if He had issued invitations to my life and asked me to watch for the people He would be sending. What a concept!”

From that point on, she saw people with different eyes. She calls this list “God’s Guest List.” What started as thirty blank lines, she now realizes could be an infinite number.

She quotes Matthew 23:34, “Therefore I am sending you prophets and wise men and teachers…" and goes on to say, "It’s up to us to recognize them. When we start searching, we’ll begin to look deeply into every person we meet to see if we can find God’s fingerprints on that person.”

As I reflect on the last couple of weeks, I can point to at least three people I’m sure God sent into my life.

As I attended my nephew’s graduation from the University of Georgia, I had the honor of hearing the keynote address given by James Shepherd of the Shepherd Spinal Center.

Shepherd shared how his own spinal injury from a surfing accident in the seventies inspired him and his family to begin the Shepherd Spinal Center in Atlanta, which is now one of the top ten spinal care hospitals in the nation, and often treats patients regardless of their ability to pay. 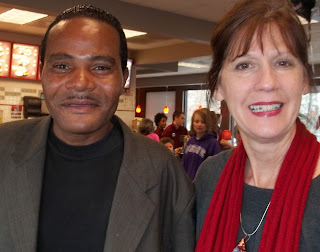 Later that week, I was eating at a Chick-Fil-A with my family, and noticed someone shooting a film nearby. During a break, the man being filmed turned to us and begin to share a little of his story. Michael Davenport lost both his arms as an adolescent when he accidently lassoed an electrical wire with a length of copper wire with which he was playing. He now works as an artist, painting with a brush in his mouth.

A couple of days before Christmas, I heard a knock at the door, and heard my husband welcoming Dr. Bob Bowen into our home. He attends a community Bible study my husband leads at the YMCA.

Dr. Bowen, now retired, was a former Physical Education instructor at the University of Georgia. As we talked, I also learned that from 1945 until a week before the end of the World War II, he piloted B-17s on missions deep into enemy territory. He helped the Allies by destabilizing Nazi synthetic oil production, and industrial centers. 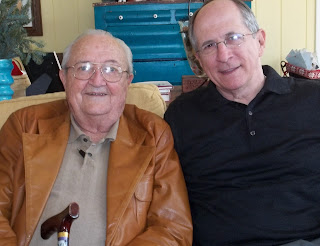 As he sat on my sofa, I realized that here was a man who made a difference in history when he was only twenty-two years old.

What a privilege to spend time with him.

At the end of each of Macomber's chapters in God’s Guest List, she adds a section called “Gifts from our Guests” on what she learned from the guest she’d just written about.

What did I learn from my three guests? From James Shepherd, I was reminded that God can turn adversity into a mighty power for lasting good. In Michael Davenport, I saw the reality of God’s words in Isaiah, “Beauty for ashes.” Everyday Michael Davenport puts beauty into the world despite his disability and scars from burns, which cover much of his body. And in Dr. Bowen, I saw again how the bravery and courage of just one person plays a significant part in the unfolding of a much larger plan.


When I was a very small child, I remember standing in my front yard, watching the planes glide overhead, and wondering whether I’d ever fly myself. Years later I’d be cruising in a plane similar to the ones I saw as a child when a former American President would emerge from first class and shake my hand as he graciously greeted each person on the aircraft.


That little small town girl could've never imagined the amazing people on God’s guest list for her. And that’s why Macomber talks about the anticipation of it all.

“Each guest that God brings into our lives leaves us with a unique gift.”

Posted by Beverly Varnado at 4:28 PM