If your God is too small

As I sweep paint across a canvas measured in feet, it feels so strange. For decades, I've used a small brush to move color around on a watercolor block often as miniscule as four by six inches.

The transition from small to large has been liberating. I will always love the intricacies of watercolor, yet I am finding new joy in these broad spaces. 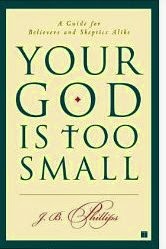 J.B. Phillips in his classic book, Your God is Too Small: a guide for believers and skeptics alike, writes, “Whatever a man’s reaction may be to the idea of the terrific size of God, the point to note is that his comment is this: ‘I cannot imagine such a tremendous God being interested in me,’ and so on. He ‘cannot imagine’ which means simply that his mind is incapable of retaining the ideas of terrifying vastness and of minute attention to microscopic detail at the same time. But it in no way proves that God is incapable of fulfilling both ideas (and a great many more).


Did you get that? We have a God who simultaneously embodies “terrifying vastness and  . . . minute attention to microscopic detail.”


The first time I read Phillips book, I was flying alone to some distant city. The ascent into the endless sky seemed to reinforce the idea of God’s greatness as if I were being given a God’s eye view of the world. Yet, the God presiding over the vastness through my window came along side me at that very moment to help with the thing I struggled with, my flying fears. Me, one small dot on the planet, and yet he cared to give me strength to face my fear.


God is big enough for all of it.


In a biography of Phillips, I remember reading that at one point in his life, he faced a life threatening illness. The doctors told him, that he wouldn’t make it. During one acute episode, in a coma, he seemed to be crossing through the refuse of life, and he could see someone a distance away in a beautiful place. All Phillips wanted was to reach that place, but when he neared, he was told he had to return.  He awoke crying and the nurse by his bed said something like, “Why are you crying, you made it. You’re going to live.” But, he had seen the other side, and he wanted to stay there.


Phillips did live and began a fresh translation of the New Testament during World War II when believers all over the world needed new insight into the Word of God. And perhaps it was that experience of near death that helped him write Your God is too Small, because he had seen the vastness and beauty beyond.


I’ve just purchased another one of those large canvases, because I think God is teaching me something. This side of heaven, we tend to stay in small spaces, but I believe God is trying to move us into bigger spaces, to allow God to be God, instead of us always trying to keep him contained.


In my novel, Give My Love to the Chestnut Trees, a quote from Sydney Lanier sets the trajectory of the book. “As the marsh hen secretly builds her nest on the watery sod, I will build me a nest on the greatness of God.”


Sometimes, we box ourselves in because of fear, and God has to push us out of our confinement into that larger space. It’s scary, because if we fail, we fail big.


And there’s the fear again.


But, God calls us to build our nests on Him, the one who is bigger than our ideas of Him.


Yet, at the same time, concerned about every detail of our lives.
"To you, O God, belong the greatness and the might, the glory, the victory, the majesty, the splendor; Yes! Everything in heaven, everything on earth;the kingdom all yours" (I Chronicles 29:11)

Posted by Beverly Varnado at 11:09 AM

Email ThisBlogThis!Share to TwitterShare to FacebookShare to Pinterest
Labels: fear, I Chronicles 29:11, J.B.Phillips, Your God is too small